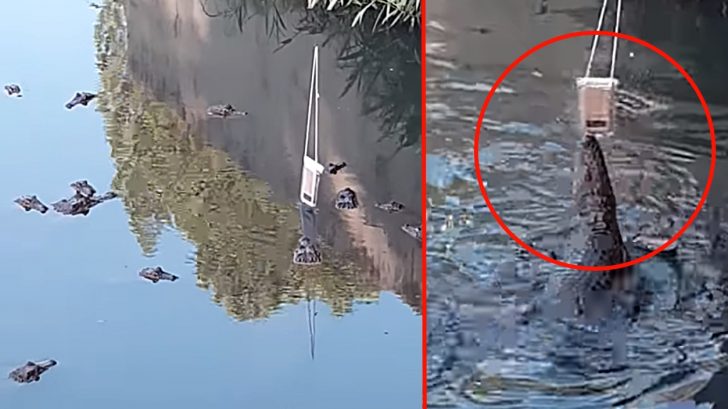 It was an exciting but shocking day for one tourist who was visiting southern Brazil’s Santa Catarina state. He was walking over this bridge with alligators underneath and decided to dangle his tablet over the ledge to get a closeup shot of the gators.

His tablet was in a waterproof protective case and at first, he was able to dip it all the way down to water level and film that gators. However, he lifted it up to get a better angle and began to dangling it a little too close to a few gators. One of them immediately jumped up and snapped at it.

The gator missed and sent the table spinning in circles. This should have been a cue for the tourist to get his tablet out of the danger zone before it got destroyed. Maybe looking down from the bridge distorted his vision because he dipped it down again a little too low and this time the gator got a firm bite on the “protective” cased tablet.

At this point, it was a tug of war. A war in which the gator won in about 5 seconds because it wasn’t letting go. The tourist’s string eventually snapped and the tablet went for a swim in the gator’s mouth. People gasped in shock as they watched the gator chomp and chew on the man’s tablet.

Watch Gator Take Man’s Tablet In The Video Below