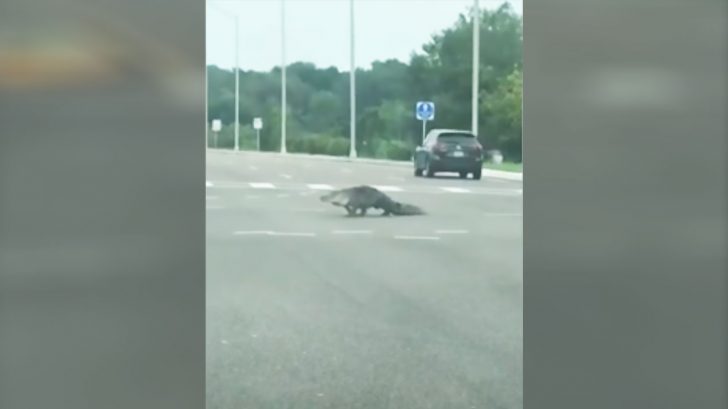 In Florida, it’s fairly common to see an alligator every now and then. Occasionally, encounters with these creatures can be like the one that just happened the other day.

A massive alligator was filmed crossing an intersection and brought traffic to a standstill as it crawled toward petrified drivers.

Francis E. Scott-Marr was driving to a friend’s house when she spotted the four-legged reptile. As her dog barks furiously at the giant gator, she can be heard screaming,

“Lord have mercy, look how big it is! It’s coming for me!”

The alligator makes its way towards her. Then as it gets closer decides to change its direction and keep walking.

An estimated 5 million American alligators are spread out across the southeastern United States with roughly 1.25 million of them in the state of Florida. It’s a common misconception that alligators are slow creatures. When needed, they can move rather quickly on land but only in short bursts and tire out very quickly. Nevertheless, alligator bites are serious injuries due to the reptile’s sheer bite force and risk of infection. Because of this, any encounter with an alligator should be taken seriously and extreme precaution should be used.

Watch the video below to see the entire incident.