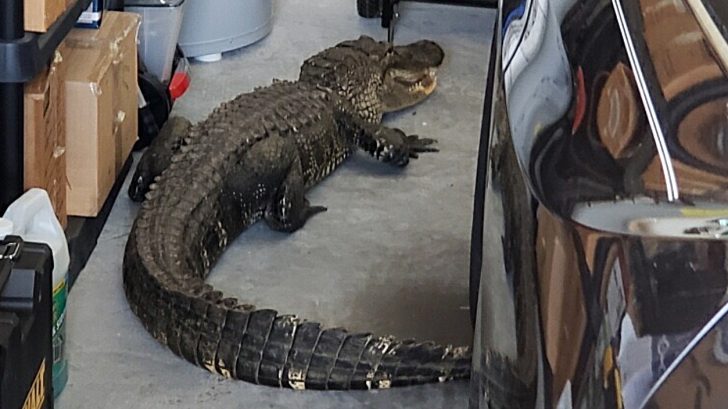 On February 11th the police department got a call in North Port, Florida about a seven-foot alligator that was found in a local’s garage as they were headed out to leave one afternoon.

Apparently the homeowners forgot to close the door to their garage and the alligator saw it as a place to take refuge. There’s a nearby canal where they believe the gator came from so the wildlife officials were called to the scene to deal with the situation.

They took pictures of the gator and captured it, then took it back to the canal. The North Port Police Department got on Facebook and posted the pictures expressing a little humor about the whole situation.

They wrote, “Wallet ✔️ Keys ✔️ Phone ✔️ Alligator ✔️ Let’s go honey. Wait… what? One local resident on Hobblebrush Drive in North Port had a seven footer trying to catch a ride this afternoon. We got the confused Alligator mississippiensis back into the nearby canal. C-ya later #alligator!”

People in the comments were saying that “it’s that time of year” for the alligators to start venturing onto people’s properties. With that said if you live in gator territory, it’d be a good idea to make sure you keep your garage door shut.