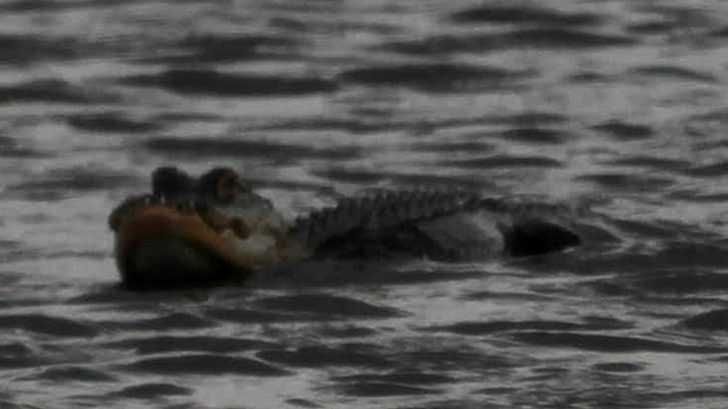 Stacey Lynette from West Palm Beach, Florida was hanging out near the murky waters of the Everglades when she spotted a nine-foot alligator missing a large part of its upper jaw.

“I saw this gator far away and he looked weird to me. I grabbed my camera and sure as sh*t, the whole end of his top jaw is missing,” Stacey wrote on Facebook.

Photos posted to Facebook showed the alligator alive in the water swimming with a major underbite and seemingly living unaffected by its handicapped condition.

“The photo quality is crap because he was really far away. By the looks of him, he’s doing alright though,” Stacey said about the gator on Facebook.

Its bottom teeth protruded out where the end of its upper jaw should have been and the Florida Fish and Wildlife Conservation Commission believes this was probably due to it fighting with another gator during mating season.

In the state of Florida, there are approximately 1.3 million alligators found across all 67 counties and they can grow to around 15 feet and weigh over 1,200lbs.

Most of them will live between 30 to 50 years in the wild too and their fights can be fairly vicious.

Alligators are also known to actually grow their appendages back but it only seems to work with their tails.

Unfortunately, this gator will not be regrowing its jaw back, however, its species’ healing abilities is probably what kept it alive after its face got ripped off and having somewhat of an upper snout is what keeps it alive today.