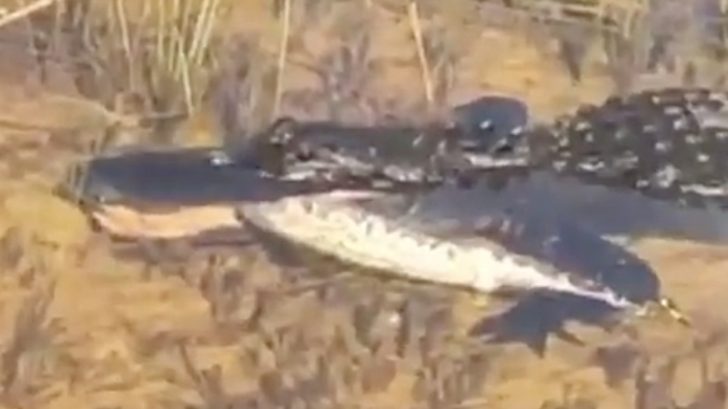 The Burmese python has been destroying south Florida’s natural parks, especially the Everglades, ever since people started releasing their imported pet pythons into the wild 20 years ago.

Burmese pythons are an apex predator that can take on just about everything in the wild, even a deer or an alligator. However, one alligator was spotted by the Everglades National Park rangers winning the battle against this invasive species.

The alligator was chomping on the snake underneath the water and park ranger Richard Petrosky who was there took a video of it and posted it to their Twitter saying, “With all the news of pythons overwhelming the Everglades ecosystem, it gives us hope to see our native animals fighting back.”

CHOMP!!! ? This invasive Burmese python was no match for our mighty, native American alligator!

With all the news of pythons overwhelming the Everglades ecosystem, it gives us hope to see our native animals fighting back. ?

Florida has desperately tried to remove the invasive snakes from the Everglades and it’s been a tough battle. Many removal programs have been set up to remove the invasive species and since 2017 around 2,500 have been removed thus far. Just recently, on January 9th, 2020, the state held a 10-day-long competition called the Python Bowl and it attracted 750 amateur and professional Burmese python hunters.

The Python Bowl ended up gathering 80 snakes in total from during those 10 days, which definitely helped out. However, Florida wildlife officials say they estimate a population of over 100,000 pythons that are causing damage to the ecosystem in the state of Florida, so there’s many more to go.