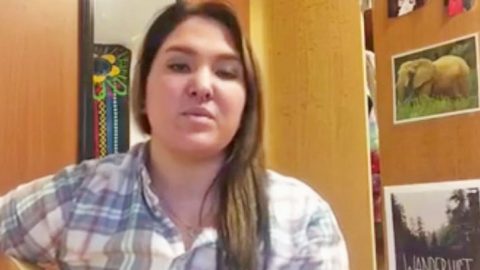 Allie Colleen is quickly making a name for herself in country music. The youngest daughter of Garth Brooks has already captured the attention of thousands of country fans with her charming voice, and her fan base is rapidly expanding.

In the past, Allie often uploaded country covers to her Facebook page, with many of them focusing on music from prior decades. While Allie enjoys singing all of the songs she records, one cover was more meaningful to her than any other.

On November 12, 2015, Allie shared with her followers that it was about time she covered her all-time favorite song. That song is none other than Keith Whitley‘s number one hit “Don’t Close Your Eyes.”

Along with “When You Say Nothing at All,” “Don’t Close Your Eyes” was one of Whitley’s signature tunes. It was also one of the final songs released before his death in April 1989.

“Don’t Close Your Eyes” was such a huge hit that Billboard named it as the top country single for the year of 1988. Its popularity has led to a wide array over covers over the years, including a particularly emotional one from Garth.

During the 50th CMA Awards in 2016, Garth performed a portion of the song while Keith’s widow, country star Lorrie Morgan, looked on with emotion. The performance was probably emotional for Garth as well, knowing how much the song means to Allie.

Before Allie posted her cover of “Don’t Close Your Eyes,” she revealed her true feelings about the song to her followers. “This is my ultimate favorite song and I hope I do it justice,” she wrote. “RIP Keith Whitley.”

We’d definitely say that Allie did the song justice and then some.

The video she shot for her cover was simple, and only focused on her hands as she played her acoustic guitar. Although you can’t see Allie’s face, you can clearly hear the emotion in her voice as she sings. The fact that she can move people with only her voice and nothing else is what makes her an outstanding artist.

Allie sang “Don’t Close Your Eyes” with effortless beauty, letting her voice touch certain notes with the lightness of a feather. While her voice was soft, it still contained a wealth of power, resulting in a performance that will leave you breathless.

Go ahead and tune in below to watch Allie’s immense talent on display in her cover of “Don’t Close Your Eyes.” We think Keith would be honored to hear his song performed in such a heartfelt way…