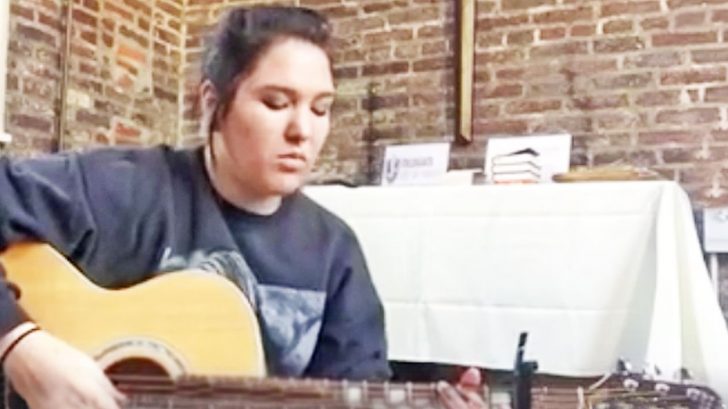 Garth Brooks has a lot to be proud of. From becoming the first solo artist to have nine albums certified Diamond to being crowned “Entertainer of the Year” at the 2016 Awards, he has a lot to be thankful for.

With Garth Brooks, his daughter Allie, and Trisha Yearwood at the Belmont Showcase pic.twitter.com/KYTDhDVdSC

Adding to his list of blessings, Brooks’ youngest daughter Allie is following in her father’s footsteps and has been rapidly accumulating a fanbase of her own. With over 10,000 likes on Facebook, the young singer has earned a loyal fanbase through her enchanting vocals.

Y’ALL!! I met Mitch Russell (opens for Garth Brooks) and Allie Colleen (Garth Brooks daughter) tonight and I am in awe of their talent!!! pic.twitter.com/O7GGGUpbsj

Allie honored the great Randy Travis with an angelic cover of his iconic “Three Wooden Crosses.” Acoustic guitar in hand, the aspiring singer flawlessly executed her delivery of the powerful song. She puts her own spin on the tune, exchanging the deep vocals of Travis’ original for her heavenly soft voice.

“Three Wooden Crosses” was released by Travis in 2002, going on to earn him his sixteenth No.1 hit single. The tune was named “Song of the Year” at the 2003 CMA Awards as well as “Country Song of the Year” by the Gospel Music Association.

You can hear her heavenly cover of “Three Wooden Crosses” in the video below.

COVER: Three Wooden Crosses This song has been a part of my life since I was little. I didn't know Kim personally but I have grown up hearing stories about him and how good a friend he was to my family. Prayers going out to The Williams Family and Friends. The most incredible thing about songwriters is that they live in their songs. So here to keeping the music alive. Thank you Kim Williams, you will be greatly missed.