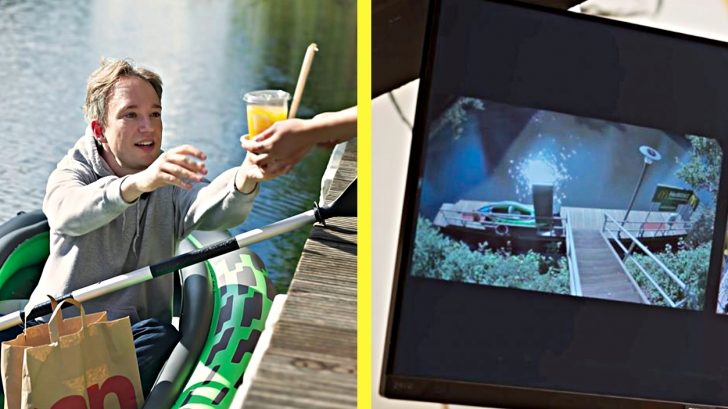 YouTuber Tom Scott shared an interesting video about a McDolnad’s that many people don’t know about and it has a float-through where people can pick up their food by kayak.

That’s right, with 39,190 McDonald’s food chains in the world, there is one located right on the Elbe River in Hamburg, Germany and it is the one and only float-thru McDonald’s. Signs say that it was built specifically for “McBoats” to pick their orders up hot and ready.

A dock and stairway was built next to the McDonald’s parking lot to access the river and the idea was created to promote exercising and living a healthy lifestyle while serving those folks a meal.

Even though it’s been operational since 2015, it wasn’t until Tom filmed a really good video showing exactly what it’s like to visit the only McDonald’s that has service to a river canal that it became popular.

The video showed him paddling up to the dock where there were signs instructing him to download an app on his phone to order and be served food without having to exit his kayak.

There used to be a speaker and microphone system set up on the dock but since technology has been updating, so has the way of ordering, and now everything has gone fully to the app.

Tom makes his order and within minutes, an employee walks down to the dock and hand delivers him his food. The manager of the establishment Adrian Dudziak says they are open 24 hours, 7 days a week in the spring and summer but not in the fall or winter.

He says people from all over the world come to visit knowing it is the only one in the world. Also, with it being in Germany, you can get a beer with your Big Mac!

Check out the video below to see the footage Tom filmed.