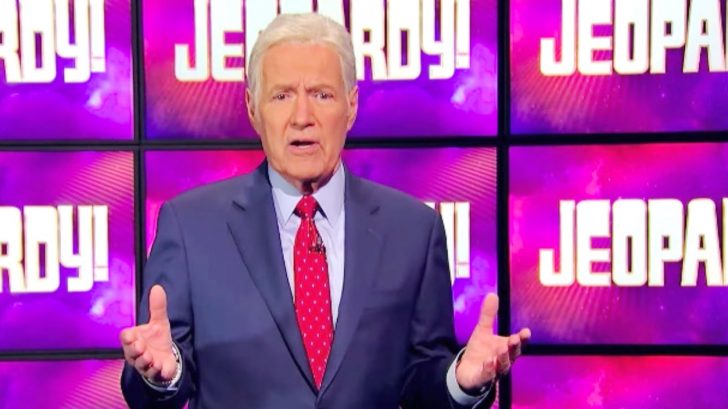 At the end of August, Jeopardy! host Alex Trebek was happy to share that he completed his chemotherapy treatments. The 79-year-old game show host announced his diagnosis with stage four pancreatic cancer through a video message in March.

“Now normally the prognosis for this is not very encouraging, but I’m going to fight this,” Trebek said in the video.

Trebek shared a “mind-boggling” update on his cancer battle with People in May. He said his doctors told him he was responding well to treatment and that he was in “near remission.”

That brings us to late August, when Trebek announced he had started filming a new season of Jeopardy!. In that announcement, the show host also revealed that he had finally finished his chemotherapy treatments.

“I’ve gone through a lot of chemotherapy,” he said. “Thankfully, that is now over. I’m on the mend and that’s all I can hope for right now.”

"Let me tell you, it's going to be a good year." Alex Trebek is done with chemotherapy and back at work on "Jeopardy!" https://t.co/V34wC6dGoK pic.twitter.com/C9CpsYQsjF

Unfortunately, the joy Trebek felt over completing chemotherapy did not last for long.

During an interview with GMA, Trebek shared that his health took a turn for the worse not long after he completed his chemotherapy treatments. He said he lost 12 pounds in one week, and that his “numbers went sky high.”

Because of this, Trebek said his doctors believe a second round of chemotherapy is needed:

“I was doing so well. And my numbers went down to the equivalent of a normal human being who does not have pancreatic cancer. So we were all very optimistic. And they said, ‘Good, we’re gonna stop chemo, we’ll start you on immunotherapy. I lost about 12 pounds in a week. And my numbers went sky high, much higher than they were when I was first diagnosed. So, the doctors have decided that I have to undergo chemo again and that’s what I’m doing.”

SAD UPDATE: 'Jeopardy!' host Alex Trebek announces he's undergoing chemo again after his 'numbers shot up'. After a short period of optimism when he stopped chemotherapy, his "numbers shot up" and doctors ordered him back on the treatment. https://t.co/KeroJSx4hI #AlexTrebek pic.twitter.com/otccljruxc

Trebek also shared how the cancer battle has taken a toll on his mental health.

“When it happened early on I was down on myself,” he said. “I didn’t realize how fallible each of us is in his or her own way…I talk to the audience sometimes and I get teary eyed for no reason. I don’t even bother to explain it anymore, I just experience it. I know it’s a part of who I am and I just keep going.”

Despite this recent setback, Trebek said he has no plans to step down as the host of Jeopardy!.

“As long as I can walk out and greet the audience and the contestants and run the game I’m happy,” he said.

And we’re always happy to see Trebek on Jeopardy!. We’ll continue to pray for him as he undergoes his second round of chemo.

You can watch Trebek speak about this most recent update in his cancer battle by tuning in to the video from the official Jeopardy! YouTube channel below.