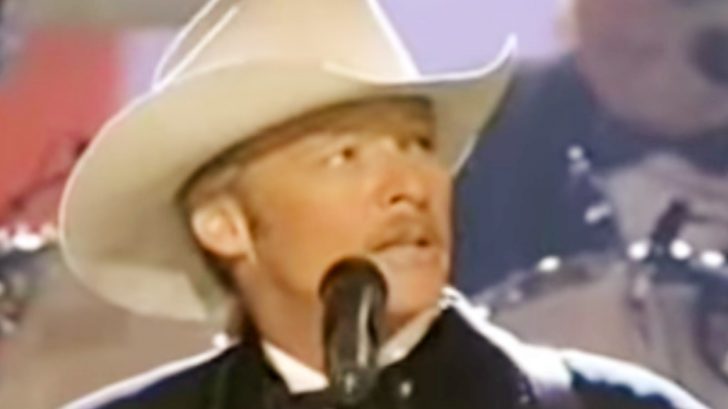 A Long Line Of Respect

Like many country artists, Alan Jackson has always looked up to George Jones as one of his greatest musical heroes. But “The Possum” was even more to Jackson than just a role model, he was a friend.

The two maintained a friendship for many years, and Jones and his wife, Nancy, even appeared in Jackson’s music video for “Good Time.”

After Jones passed away in 2013, it was Jackson who took to the Opry stage at his funeral and performed what is universally known as the saddest song in country music history, “He Stopped Loving Her Today.”

But years prior, Jackson showed his respect for Jones through another performance of another one of his emotional songs. And in doing so, he single-handedly created what is now known as one of the greatest moments in country music history.

The year was 1999. Both Jones and Jackson were experiencing immense career success at the time. Jones’ album, Cold Hard Truth, was one of the most well-performing records of his career, as it peaked at the fifth spot on the Country Albums chart.

Its success was surely boosted by its most popular track, the song “Choices,” which songwriters Billy Yates and Mike Curtis wrote with the country music legend in mind.

The song was an instant hit, and radio stations were bombarded with calls to play it on air. It was also a hit within the music industry itself, and Jones was given the Grammy for Best Male Country Vocal Performance for bringing the song to life.

“Choices” was also nominated for Single of the Year at the 1999 CMA Awards (it lost to the Dixie Chicks‘ “Wide Open Spaces”). Since the song was such a big hit and Jones was a nominee, the CMA asked him to perform during the ceremony.

Alan Acts Out On George’s Behalf

But there was a catch.

The CMA informed Jones that he would only have a limited time to perform, and asked him to sing a shortened version of “Choices” rather than the full song. Jones refused to do so, and ended up not attending the awards.

This is where Jackson came in.

Jackson was also invited to perform on the show. He was asked to sing his hit song “Pop a Top,” which chart-wise, had performed even better than Jones’ “Choices.”

The lively and fun-lovin’ tune seemed like the perfect fit for the awards ceremony, and Jackson was given a full performance slot to showcase it.

He kicked off the song like normal, seeming bubbly and cheerful as he sang the upbeat tune. But no one other than the members of his band knew that underneath that grin and his bright white cowboy hat, Jackson was less than happy.

What Went Down From There

You see, after hearing how the CMA had approached Jones about singing “Choices,” Jackson was upset. He decided that if the CMA wasn’t going to let Jones sing the way he wanted to, he was going to make sure the country music legend was still recognized during the ceremony.

Suddenly, in the middle of an instrumental break in “Pop a Top,” Jackson refused to sing his own song any longer. Instead, he broke into an emotional performance of “Choices,” prompting the entire crowd to cheer and rise to its feet.

Remember one of my fav songs being sung by Alan Jackson at the CMA awards show, "Choices" by George Jones. Classic moment

By the time he finished, Jackson didn’t linger to bask in the overwhelming applause being showered upon him. He simply turned around and walked offstage, guitar in hand.

It has long been said that Jones was watching the awards show from home, and was moved to tears when he witnessed what Jackson did.

Back then, Jackson’s actions were viewed as a sort of “protest” against the CMA. While many still view the moment in the same way today, it is more often regarded as an epic show of respect from one country great to another.

Do you remember when Jackson ceased singing his own song to recognize Jones instead? Whether the answer is yes or no, you’ll want to catch the moment in the video below.