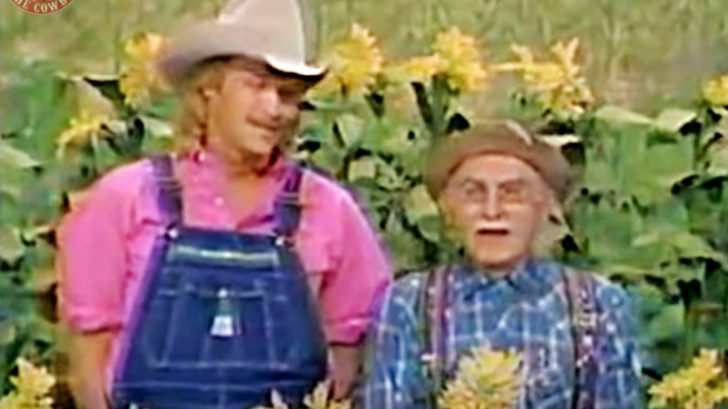 America’s favorite classic TV show, Hee Haw kept viewers laughing over their endless plot of witty jokes and comical skits for years. The first episode aired in 1969 and went on for 20 years of success with features from some of country music’s biggest stars. Artists from Loretta Lynn all the way to George Jones made their big appearance on the show.

The show carried a series of recurring sketches and segments each episode that viewers couldn’t get enough of. One of their most memorable sketches was “Comedy In The Cornfield.” The sketch involved cast members and guests “popping up” to tell jokes and one-liners. Guest stars often appeared in the sketches in later seasons, one of those being country music legend, Alan Jackson.

The 1990 episode features several of the cast members including Alan spitting their best jokes. Young Alan appears on screen alongside the comical Grandpa Jones. In a pink button-down, overalls, and his signature cowboy hat, Alan tells Grandpa a joke.

“Hey Grandpa, I didn’t realize cornfield county was far out in the sticks.”

Grandpa replies, “What are you talking about Alan? Why we’re just 15 minutes from the city… by phone.”

Both Alan and Grandpa laugh before disappearing back into the field. Throughout the sketch, multiple cast members come together to tell some more jokes. Alan comes back into the sketch but this time with a new member of the cast, Ida Lee Nagger.

As they pop up from the cornfield, Alan leans away as Ida starts to sneeze on him. When Alan asks her what the doctor recommended she do about her cold, she gives him quite the response!

The hilarious 1990 episode featured another popular artist as well, Glen Campbell. Glen is shown popping up in the cornfield with a couple of the cast members too.

Keeping the laughter going through the entire show was not a hard task for the cast of Hee Haw as their jokes got wittier every time!