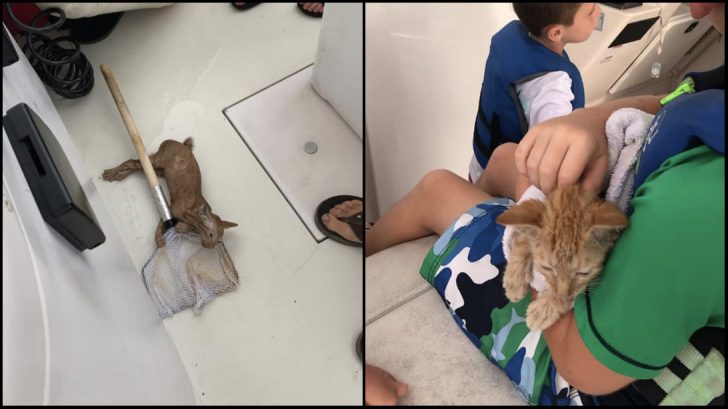 A day of fishing in the Gulf of Mexico turned into an unexpected rescue opportunity for a charter boat from Orange Beach, Alabama.

Steve Crews, owner and operator of Still Flyin Charters, was fishing in the Gulf near Perdido Pass when his crew thought they saw a sea turtle. The 35-foot sport fishing vessel, which specializing in offshore fishing trips, drew closer and realized that it was a kitten struggling to stay afloat.

“He was struggling to stay up,” he posted on Facebook. “We caught him, brought him in the boat and let him recover.”

Photos of the rescue show the drenched laying next to a net on the boat’s deck. Another shows one of the boat’s passengers holding the towel-wrapped kitten and comforting it as the boat makes its way back to shore. It’s unclear how the kitten ended up in the middle of the ocean, but Crews suspects that it was pulled out by the tide.

Our catch of the day. Poor little guy was sucked out by the tide. We caught him just outside the pass in the gulf. He…

Crews told local media that he found a new home for the kitten, but the animal didn’t want to go home with that person. So Crews and his wife decided to keep it, although they haven’t settled on a name for it yet. Crews said he is partial to Sharkbite and his wife wants to call it Lucky.