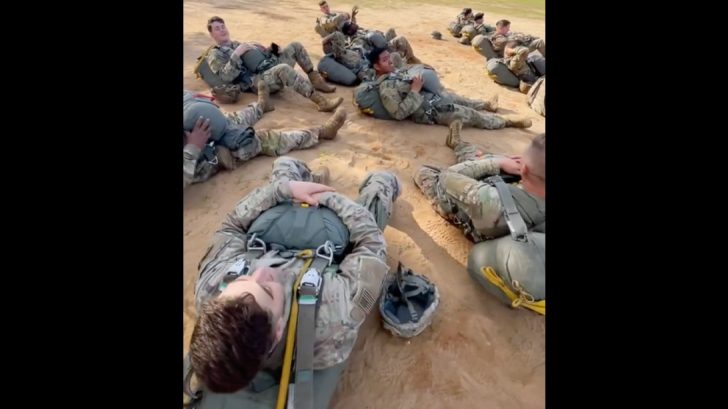 A group of 82nd Airborne Division soldiers stationed at Fort Bragg, North Carolina, have gone viral after a video of them singing the Temptations’ classic “My Girl” made its way around the internet.

The video, filmed by parachute rigger Kara Hall, shows a group of soldiers laying on the ground, reclining on their parachute packs waiting for their turn to jump out of a helicopter.

“When they are around I ask. Sometimes they have time to sing for us, sometimes they don’t. You just have to catch enough of them together and ask. We are all down-to-earth people living our best lives in the sky!” Hall said.

Hall posted the video to TikTok where it quickly went viral, and once you listen to it you’ll know why.

“The 82nd ABN DIV Chorus made my day today on the drop zone when I requested an old classic!” Hall captioned the TikTok video. “What made it better is that they were in harness jumping from a UH-60 (helicopter).”

Viewer reaction to the video included requests for more videos, notes of thanks for their service and proclamations of patriotism.

“I’ll take these guys over Maverick and Goose any day!” one viewer wrote.

“My tax money pay for combat training and singing I am all for it,” and “This is the most American thing ever,” others commented.

The soldiers in the video are members of the 82nd Airborne Division All-American Chrous. A few of them appeared on ABC World News Tonight after the video went viral and explained the purpose of the chorus that has been around more than 80 years.

“Our main job is to uplift the spirits of our soldiers that fight for our country in different areas of the world,” they told host David Muir.

Watch the video of the soldiers performing “My Girl” below.

@karalhall The 82nd ABN DIV Chorus made my day today on the drop zone when I requested and old classic! What made it better is that they were in harness jumping from a UH-60. #airborne #jumpmaster #mygirl #blackhawk #realtalent #mademyday #fortbragg #82ndairborne ♬ original sound – Kara Hall