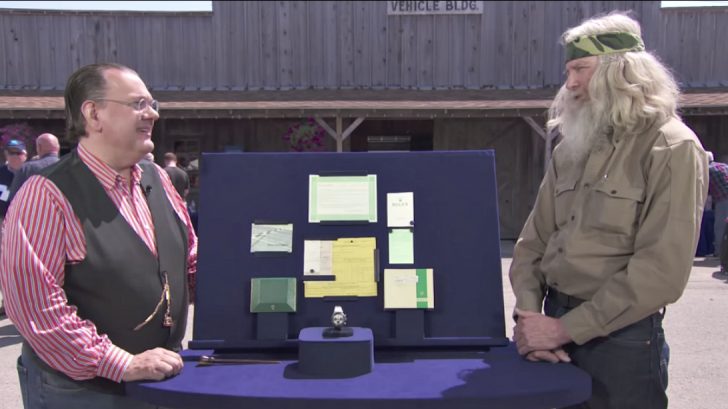 While stationed in Thailand in 1974, an Air Force ammunition worker saved up nearly a month’s salary to purchase a Rolex watch. Nearly 45 years later, that man took the watch to the Antiques Roadshow in West Fargo, North Dakota, and learned that it is valued at over $500,000. While the watch value and the story behind it are intriguing, the veteran’s reaction to the news is what everyone is talking about.

The Antiques Roadshow travels across the country in search of rare, hidden treasures, most of which people don’t even realize are valuable. Hopefuls wait in line for hours to find out if their auction find or family heirlooms are valuable. During the episode that aired on January 27, 2020, a U.S. Air Force Veteran got the surprise of his life when he found out that the Rolex watch he had been keeping in a box for more than four decades was going to make him a wealthy man.

The veteran, introduced as David, said he purchased the Rolex because he had become intrigued with them after noticing that most pilots wore them. He had also heard it was a good brand for scuba diving. He ordered it through the Air Force base exchange in November 1974 and received it in the mail five months later.

Upon receiving the watch that he had paid $345.97 for, David decided that it was “too nice to take down into salty water.” So, he kept it in a box, only taking it out to look at it “two or three times” before taking it to the Antiques Roadshow.

In addition to the watch being in pristine condition, David had saved all the original paperwork: Warranty papers, Rolex brochure, receipts, and the boxes.

“Collectors love the watch because Paul Newman wore a similar model in the 1969 film, Winning,” appraiser Peter Planes said. “It’s an absolute fabulous find. It’s one of the rarest Paul Newman models, and in this condition, I don’t think there’s a better one in the world.”

Planes told David that a Rolex Oyster Cosmograph like his is worth about $400,000 at auction. When David heard the news, he toppled over, stunned.

What causes this guy to lose it on @RoadshowPBS?!

But, David gets back on his feet to finish the appraisal, and it’s a good thing he did because the good news just kept coming.

“Your watch, at auction today…five hundred to seven hundred thousand dollars,” Planes told David. “An absolute fabulous find. It’s one of the rarest Paul Newman models. And, in this condition, I don’t think there’s a better one in the world. I can’t thank you enough for bringing one of the greatest watches we’ve ever seen on the Antiques Roadshow. And, thank you very much for your service.”

Watch the full appraisal and David’s priceless reaction in the video below.