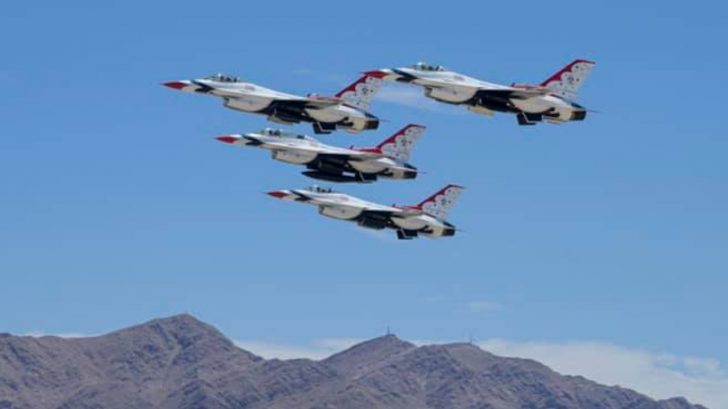 On Thursday, July 16th, 2020, Nellis Air Force Base, headquarters for the United States Thunderbird jets, released an official statement saying that the jets have been grounded after an airman tested positive for COVID-19.

The team canceled their participation in the annual Wings Over Warren Airshow at F.E. Warren Air Force Base in Cheyenne, Wyoming. The rest of the participants performed as planned on July 22nd. It’s the first time in 65 years that the Thunderbirds did not participate in the show and they explained why.

“Every year we look forward to performing at the site of our first public demonstration for our friends, family and the Cheyenne community,” the official statement said. “This was not an easy decision, but we felt it was necessary to prevent the potential spread of the coronavirus (COVID-19) after a few of our team members recently tested positive.”

The Associated Press said that the Air Force is not authorized to tell how many people have caught the virus and what the conditions are of the ones who have it, due to federal regulations. Captain Remoshay Nelson did however disclose that none of the pilots were infected.

“Our primary focus is ensuring the health and welfare of our personnel so we can safeguard our mission readiness and capabilities,” Nelson reportedly told The Associated Press.

As standard protocol commands, the individuals who did test positive will be self-isolated for 14 days before they are allowed to resume working with the team again. The Thunderbirds are scheduled to perform in Ocean City, Maryland next on August 15th and 16th.