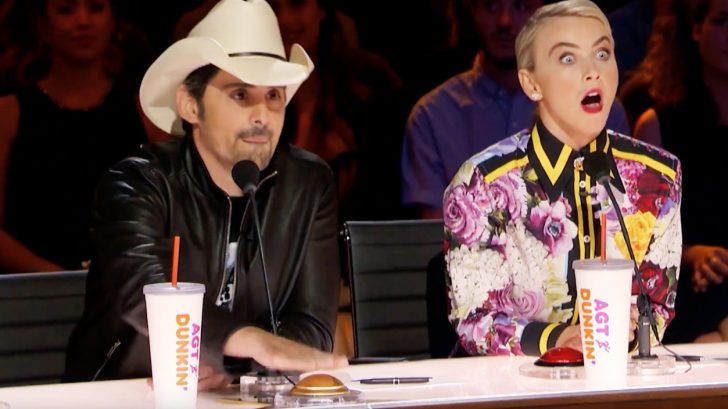 The first round of America’s Got Talent has officially come to an end. Now, during the Judge Cuts round, there is a different guest judge in each episode. Like all the regular judges, this guest judge gets the chance to press the coveted golden buzzer for one deserving act.

Tonight’s the night! I’ll be a guest judge on @AGT #JudgeCuts tonight at 8/7c on @nbc! Don’t miss it! pic.twitter.com/deQQgM6Ok9

He was chosen to help judges Simon Cowell, Howie Mandell, Gabrielle Union, and Julianne Hough choose the acts who would advance to the live shows, and sent one act straight there, without having to worry about elimination at the end of the episode.

When 15-year-old Sophie Pecora walked on stage to sing an original song, Paisley couldn’t wait to hear it. That is, until she got to the second chorus. That’s when he knew that he would be pressing his golden buzzer for her.

In a video posted to AGT‘s Twitter after her performance, Paisley said, “It’s [an] amazing thing watching someone be so vulnerable and honest in a song,” and commended her bravery for speaking her truth in a way some adults couldn’t even articulate.

It was a moment that would change @SophiePecora’s life forever.

See why @BradPaisley used his #GoldenBuzzer on this amazing singer-songwriter. pic.twitter.com/gfaO3dEaIy

The country singer said he’s very excited to see her next performance, and so are we! She is a star in the making.

Watch Paisley slam the golden buzzer for Sophie below.