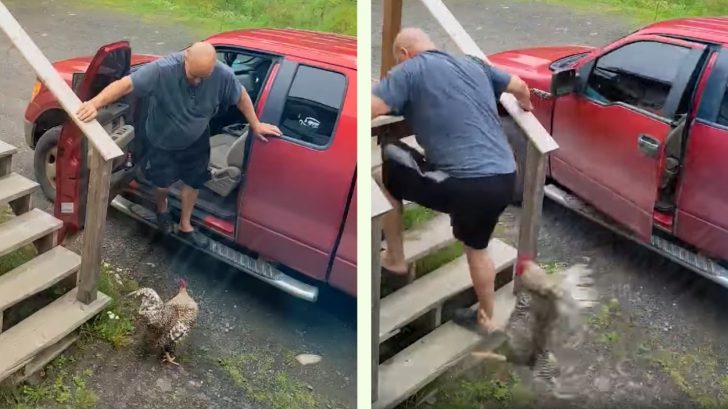 Darlene Joe from Conne River, Canada filmed a hilarious video of her territorial pet rooster preventing her brother Bush from getting out of his truck and onto the porch.

Darlene said it’s not funny when it happens to her, but when her brother pulled into the driveway and tried to make it out of his truck, she couldn’t help but film it and secretly laugh from inside the house.

She said he had no clue he was being filmed, but for two minutes and twenty-three seconds, he tried to figure out how to get from his truck to the stairs connected to the porch. With the door open, he leaned from his truck and put his hands on the porch railing trying to figure out what to do next.

The rooster vigilantly stood its ground and tried to attack Bush each time he tried to get down from his truck. Darlene watching from inside the house was almost crying with tears of laughter as she witnessed the incident.

Darlene Joe wrote on Facebook, “He had no clue he was being filmed, but when he came in my house he was wondering why I was crying lol. He thought I was cutting up onions, haha.”

It got to a point where she started to tell a man in the house that he’s going to have to go outside and help Bush because the rooster had him pinned.

Eventually, Bush did a strategic lean on the porch railing while keeping his legs off the ground and holding the truck door in a way that he could easily take off running and slam it.

Boom! That’s what he did. He jumped down to the ground holding on to the railing and slammed the door as he ran up the porch.

Another video below of the rooster being aggressive.