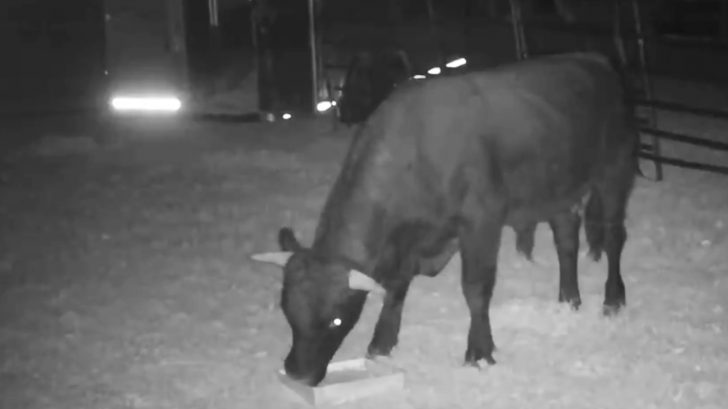 Close to 2,000 pounds of aggressive hybrid beef and buffalo is on the loose in a small Connecticut town – and has been for over a month after he escaped from a slaughterhouse.

On August 3rd, 2020, this beefalo bull got loose as he was being unloaded from a trailer at a local meat processing plant – basically, a large scale butcher. For weeks, the loose beefalo had been keeping a low profile until it was spotted just a few days ago.

According to a report by The Hartford Courant, several police officers ended up cornering the beefalo on Wednesday, August 26th, 2020.

When the officers approached it, the animal went into the posturing for a charge: lowering the head, scratching the ground with its hoof. This gave them no other choice but to back off and allow the animal some room. With this expanded room, the beefalo took the opportunity to escape and returned to a wooded area.

UPDATE: The Bull is still loose. Remain using caution while traveling in the area and contact police if the animal is seen at (860) 589-7779.

The owner of the meat processing plant, Katie Adkins, told the paper that when the bull had arrived, the owner explained that the animal was still intact, lending to why police believe it may be more aggressive.

“Beefalos,” Adkins explained, “are a little wilder than normal cattle…I mean, it’s half a buffalo.”

Now, “Buddy” the beefalo has been on the loose for over six weeks. Police shared a video and information with local station NBC Connecticut saying that they’ve had some luck luring Buddy toward his trailer.

Officers have been leaving grain near his trailer and have “strategically” placed it to try and capture the loose animal.

See the full video and news report below.