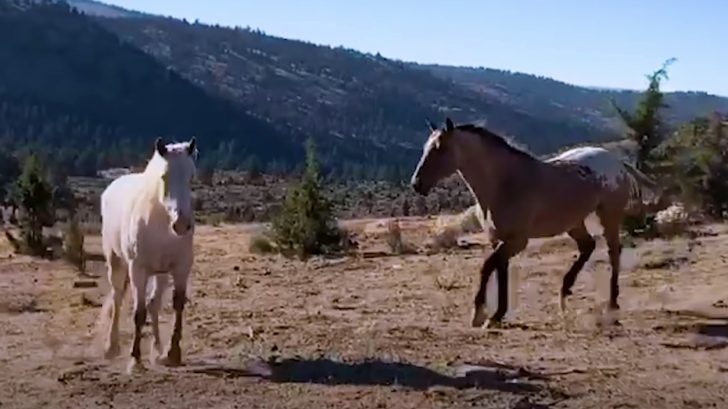 An incredible story unfolds about the moment two wild horses raised in the wilderness all their lives got separated and then reunited two years later. You’re about to witness the heartwarming reunion captured on film.

Two wild horses named Phoenix and Ghost showed up to an auction two years ago to be sold on the market to the highest bidder. Skydog Sanctuary a non-profit sanctuary that rescues at-risk wild mustangs and burros saw a picture of Phoenix and was one of the winning bidders able to purchase him. However, Ghost got sold off to another buyer.

Skydog Sanctuary wrote on their Facebook page, “We reunite equine families and keep bonded animals together and raise awareness for wild horses & donkeys in America.”

The owner of the sanctuary said a couple of years later a lady sent her a picture of a horse named Ghost that looked just like the mare in an old photo with Phoenix. A couple a weeks later they were able to find and bring Ghost to Phoenix’s pin and let her loose while he was on the backside of the hill.

Cameras were rolling and the footage showed that Phoenix heard her from a distance and immediately came trotting over the hill to investigate the familiar noise. When he got over the hill and first laid eyes on her he made a noise of excitement and ran straight to her. They met like they were in disbelief that they were standing before one another again.

Within seconds, they confirmed who they were and took off running around the pen playing, happy to be together. It was an emotional moment for the owner of the sanctuary who said she cried when she saw them meet after all that time. It made her heart smile to see them back together again and both horses were happy to see each other. It’s a beautiful scene.

Video: Mustangs Being Reunited At The Skydog Sanctuary Below