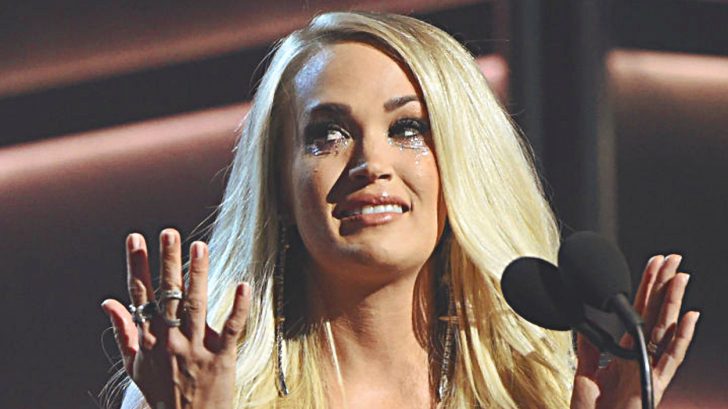 At this point, Carrie Underwood is no stranger to being bestowed with awards and honors. In the 13 years since she won American Idol, she has taken home seven Grammys, 14 ACM Awards, and eight CMA Awards.

While Underwood hasn’t been in the business long enough yet to be considered for induction into the country music hall of fame in Nashville, there is another Hall of Fame she’s eligible for. That would be the Oklahoma Hall of Fame.

As one of Oklahoma’s most famous natives, it’s sort of a shock that Underwood hasn’t been inducted into the Oklahoma Hall of Fame yet. But what you may not know is that she was almost inducted in the past.

In 2017, it was revealed that Underwood would be part of the Oklahoma Hall of Fame’s 90th class of inductees. It was an accomplishment Underwood and her fans celebrated, and everyone waited for the induction ceremony on November 16.

But everything came crashing down when, just days before the ceremony, Underwood suffered a fall on the steps of her Nashville home. Injuries on her face required 40-50 stitches, while she had to undergo surgery on her injured wrist.

Since Underwood was recovering from surgery, she was unable to attend the induction for the Oklahoma Hall of Fame. You would think this wouldn’t be a big deal, but it actually was.

Unable To Make It, Unable To Be Inducted

Per the Oklahoma Hall of Fame rules, candidates are deemed ineligible for induction if they are not present at the induction ceremony. Because of this, Underwood had her induction taken away from her before it ever happened.

Oklahoma Hall of Fame President and CEO Shannon L. Rich spoke about the issue in a statement:

“First and foremost, we want Carrie Underwood to know our thoughts and prayers are with her during her recovery. She exemplifies the very definition of an Oklahoma Hall of Fame Honoree and we are certain that she will be considered for future induction.”

Even though Underwood couldn’t be inducted in 2017, no one had any doubts that she would be named as an inductee for 2018.

At Long Last It Happened…

Lo and behold, the news everyone was expecting to hear finally broke on Thursday (May 17). After missing out on her chance last year, Underwood is now set to be inducted into the Oklahoma Hall of Fame’s 91st class!

Other famous figures joining her in the Hall will be the Pioneer Woman Ree Drummond and AdvancePierre Foods founder Paul Allen.

Now that Underwood has completely recovered from her fall, we fully expect to see her at the Hall of Fame induction later this year! She could even share her new song, “Cry Pretty” with them, which you can watch her sing below.

Congratulations to Underwood on this outstanding honor!