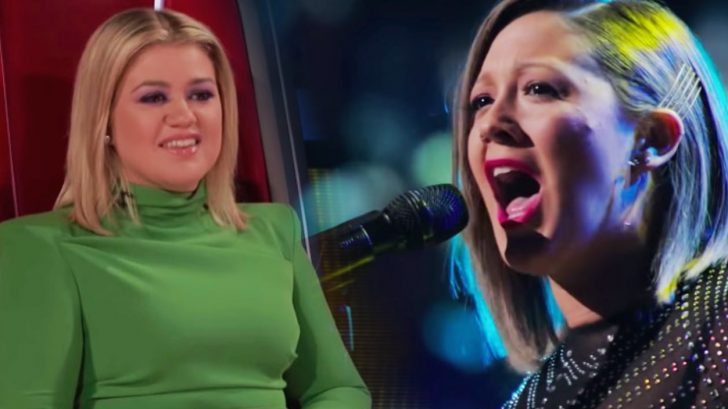 After having two coaches and making it through the battles, Lauren Hall’s run on The Voice Season 17 ended during the knockouts.

Hall originally wowed the Voice coaches with her blind audition performance of “One and Only.” She got one chair to turn with her performance, and that chair belonged to Kelly Clarkson.

Hall moved on to the battles, where she competed against the duo Hello Sunday. Clarkson ended up choosing Hello Sunday as the winners of the battle, leaving Hall up for grabs to be stolen.

Blake Shelton quickly snatched her up, and welcomed her to Team Blake with open arms.

Shelton helped coach Hall for the knockouts, and in a surprising twist, they settled on a song by her former coach. Hall decided to sing Clarkson’s “Breakaway,” which she released in 2004.

The song topped the U.S. Adult Contemporary chart. It is still tied with Celine Dion’s “A New Day Has Come” as the longest-running AC chart-topper by a female artist.

So you can imagine the pressure Hall was under as she stepped on stage during the Voice knockouts and performed her former coach’s song. She competed against Kat Hammock.

Hall’s rendition of “Breakaway” featured a different arrangement than the one you hear in Clarkson’s original. It was more stripped down, with just the sounds of a piano playing to help back her up. This left Hall’s voice exposed and vulnerable.

Clarkson seemed impressed, and could be seen smiling at the start of the performance. Later on, she even appeared to have tears in her eyes.

Although Hall gave “Breakaway” her all, she did not win her knockout. Shelton couldn’t resist the unique sound of Hammock’s voice, and chose her as the winner instead.

Sadly, Hall was not stolen back by Clarkson or another coach.

Even though Hall’s time on The Voice is over, she should know that she delivered one breathtaking performance of “Breakaway.” You can see her sing the song below.