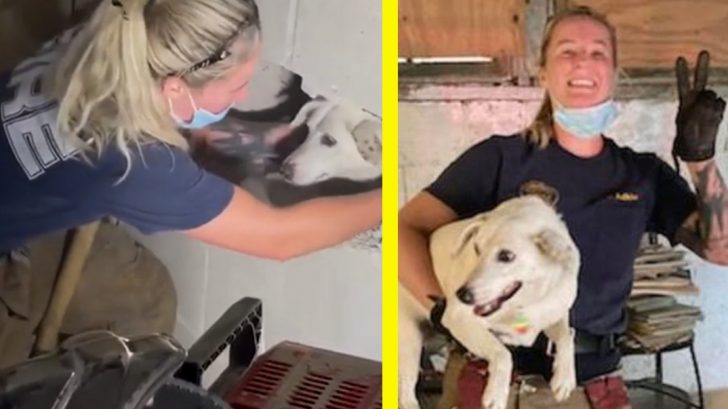 For nearly a week, Gertie was lost and her owners had been plastering the neighborhood with posters seeking her safe return.

A little squatty white dog with spots on her ears and face, Gertie was a pleasant pup to be around and her family had missed her terribly wondering what could possibly have happened to her.

“I never really felt hopeless,” her owner Connie Frick told WCPO. “I really felt like somebody took her in or she found someplace.”

To both Connie (and Gertie’s) surprise, a neighbor called in to the local fire department stating that they had heard a dog crying behind a wall in their garage.

“I heard whining and I started talking to the whining, and my dog was out there too and she barked because she heard the whining, and then I heard barking, and I thought, ‘That sounds like a puppy,’” the neighbor Vanessa Roland told KDKA 2 CBS.

When a fire crew arrived on the scene, they discovered that Gertie had actually fallen through an old roof and down behind a cinderblock wall. As they surveyed the situation, they discovered that living her up and out would not be a possibility – so they changed their approach and decided to bust into the wall to free her instead.

A video shared by the Cinncinatti Fire Dept shows a female crew member carefully breaking through the cinderblock wall, bit by bit, in order to free poor Gertie without injuring her. In the blink of an eye, Gertie’s cheerful face pokes out of the hole in the wall and cautiously surveys the surroundings.

The crew member coaxes the pup out and quickly hauls her to the driveway where she was reunited with Connie Frick.

Check out this amazing rescue in the video below!

Gertie the dog had been missing for five days before firefighters found her wedged tightly between two concrete walls in Northside. Now she's home. https://t.co/pG1YIDRjuG pic.twitter.com/3duBCrXLnV