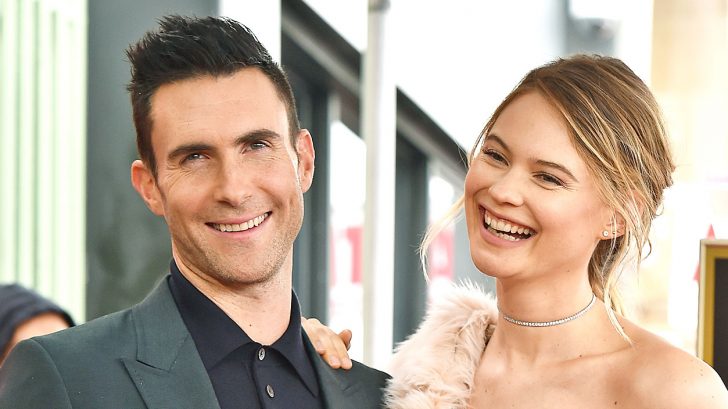 A little less than a week ago, E! News confirmed that Voice coach Adam Levine and his wife, Behati Prinsloo, had welcomed their second daughter. Born on February 15, the couple named their newborn daughter Gio Grace Levine.

Little Gio joins big sister Dusty Rose, who is 16 months old. After Dusty was born, her parents waited just a couple of days before they shared her first photo.

The stylistic shot shows baby Dusty resting on her father’s chest. Both Behati and Adam shared the same photo, each writing a simple caption that included her birth date.

While the couple hasn’t refrained from sharing photos of Dusty, they seem to be selective with what they share. Few photos show her full face, and are taken from the side or back instead.

Now, the Levines are being even more secretive when it comes to newborn Gio. While they only waited a couple of days to share Dusty’s first public photo, they waited nearly a week to share Gio’s.

Although the photo was only of baby Gio’s feet, fans were still overjoyed to see her first picture. Thousands took to the comments to congratulate Adam and Behati on the arrival of their new daughter, filling their messages with heart emojis galore.

While we’re glad to have this photo of Gio, we hope it’s not too long before the Levines share another. We’re sure she’s beautiful!

Tune in to the clip below to hear Adam talk about being a father of two daughters. He also shares his plans for future children, and here’s a hint…he wants a lot!