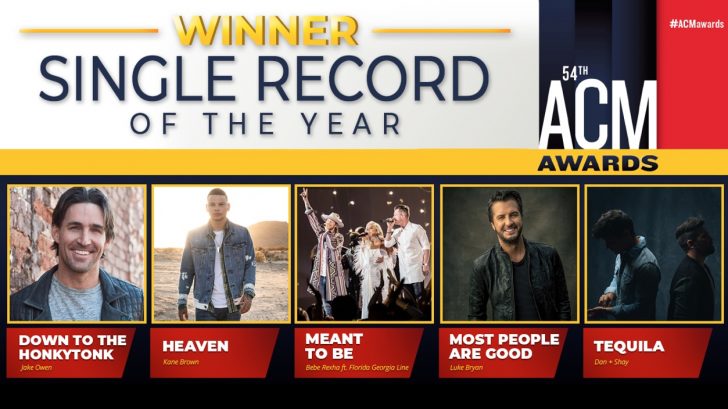 Without any hesitation whatsoever, the 54th ACM Awards got straight down to business during this year’s celebration – and we are thrilled to be able to share the winners with you!

Taking home the award for “Single Record of The Year” is an incredible honor and only a select few artists and their amazing works of music were nominated for the award this year.

Check out all the nominees below!

One of the first awards announced during tonight’s event at the MGM Grand Garden Arena in Las Vegas was the Single Of The Year – an award meant to give recognition and honor to a radio single that had gone above and beyond during the entry period. Truly, the winner will reflect that!

got something special planned…

We couldn’t be happier to wish congratulations to all of the nominees for their hard work and dedication throughout this year – and most of all, wishing a big warm country congrats to the winners: Dan + Shay for “Tequila.”

What a night for @DanandShay. Congratulations on your Single of the Year win! #ACMawards pic.twitter.com/8QvjxDulI3

This win marks Dan + Shay’s fifth time being nominated for an ACM Award, and their first-ever win! Congrats to them!

Check out their official video for “Tequila” below and let us know what you think in the comments!