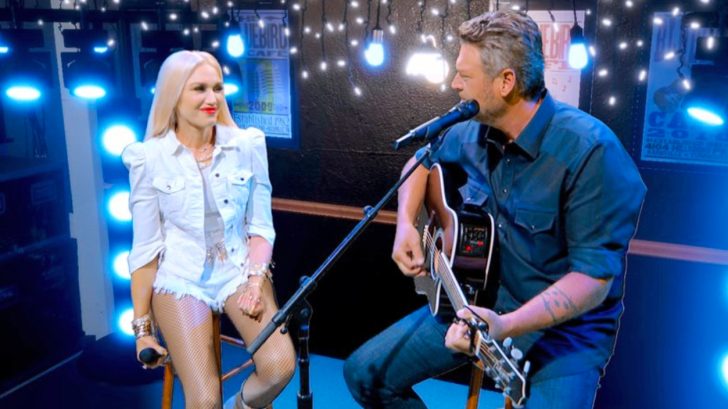 Blake Shelton and Gwen Stefani have been on a roll with their duets. After releasing “Go Ahead and Break My Heart” in 2016 and “You Make It Feel Like Christmas” in 2017 they shared a new duet, “Nobody but You,” in 2019.

“Nobody but You” went on to become a #1 country hit. Shortly after it achieved that feat, Shelton and Stefani dropped another new duet, titled “Happy Anywhere.”

The couple filmed the song’s music video on Shelton’s ranch in Oklahoma, and meshed the footage with some old videos Stefani had saved on her phone.

“Happy Anywhere” was released in late July and is already one of the hottest songs in country music. So country fans celebrated when it was announced that Shelton and Stefani would perform the song during the 2020 ACM Awards.

The ACM Awards were supposed to be held in April, but were rescheduled for September 16. The ACM put together a program called ACM Presents: Our Country  to take the ceremony’s place. Artists filmed performances from their own homes, and Shelton and Stefani participated by singing “Nobody but You.”

If the Awards took place on their original date, “Happy Anywhere” as we know it wouldn’t have existed at that time!

Although Stefani sang on the 2020 Grammy Awards with Shelton, she had previously never performed on a country awards show. So her debut ACM Awards performance was something many people were looking forward to.

The couple didn’t disappoint with their performance of “Happy Anywhere,” which was upbeat and full of romance.

The couple couldn’t be in Nashville, so they performed with a green screen that transformed into the Bluebird Cafe!

Catch Stefani and Shelton singing “Happy Anywhere” at the 2020 ACM Awards by pressing “play” on the video below. Since the song was just released in July, this performance could give it a boost on the charts!

This duet just melted hearts all over America, @BlakeShelton & @GwenStefani ❤️ The #ACMawards are LIVE now on @CBS and @CBSAllAccess! pic.twitter.com/UusFBW57OY