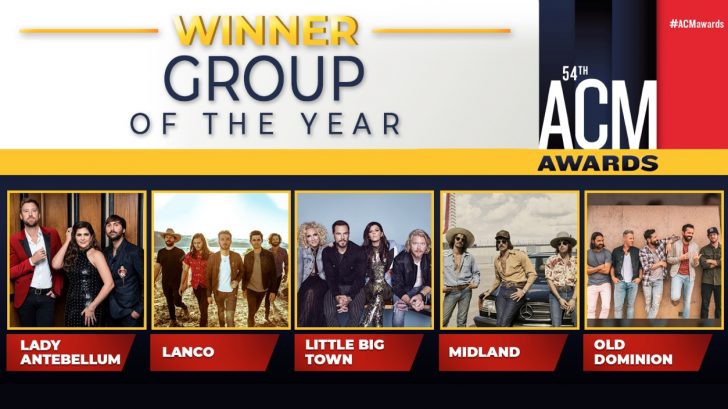 When it comes to country music, the possibilities are endless. They are solo artists, a series of duos, and a handful of powerful groups. Each of the talents has found their own unique place in the industry giving fans a series of endless hits and performances.

Over the years, legendary groups such as Alabama and The Oak Ridge boys have taken home the award but now, some new faces are ready to shine. Let’s take a look…

Group Of The Year Nominees

Paying tribute to one of our musical heroes, @Reba, at the Kennedy Center Honors was one of the highlights of our career. We love you Reba! ? Catch the performance on CBS tonight at 8/7c. ? @paulmorigi / Getty Images

Lady A has been taking over the country music scene for years. Combined of lead vocalists Hillary Scott and Charles Kelly with Dave Haywood on guitar and piano, this powerhouse trio has made quite a name for themselves. The group has won 11 ACM Awards with three of those being in this category.

If you’ll be in Charlotte, Kansas City or New Orleans in December, come join us for a FREE show thanks to @TMobile & Pandora! More info and FREE RSVP: https://pdora.co/LancoFB

Lanco is a newer band on in the genre, not wasting any time on showcasing their talents though. The band is combined of lead vocalist Brandon Lancaster, bass guitarist Chandler Baldwin, pianist Jared Hampton, drummer Tripp Howell, and guitarist Eric Steedly. In 2018, Lanco won the ACM Award for New Duo or Group of the Year.

Little Big Town has been making noise together since the late 90s. The group is combined of Karen Fairchild, Kimberly Schalpman, Phillip Sweet, and Jimi Westbrook. Their connection will one another has landed them a series of hit albums and singles. The group has won nine ACM Awards with four of those being in this category.

Our new single "Mr. Lonely," is available this Friday (? @harpersmithphoto)

Midland may be the newer group of the bunch but they have found their way to the charts quickly over the years. The country group includes lead vocalist Mark Wystrach, bass guitarist and background vocalist Cameron Duddy, and lead guitarist Jess Carson. Midland had won one ACM Award in 2017.

So much to be thankful for. Thank you for loving the music we make and the life we have. Happy Thanksgiving to you and your loved ones!

Old Dominion has been making big noise in the genre lately. The five-member band is composed of Matthew Ramsey, Trevor Rosen, Whit Sellers, Geoff Sprung, and Brad Tursi. The group has won two ACM Awards both including for Best Vocal Group.

And The 2019 ACM Awards Group Of The Year Winner Is…

We surprised @OldDominion on the Red Carpet with their award for Group of the Year!!! Congratulations! #ACMawards pic.twitter.com/y0YP6PNHYN

What an honor it must be – we are so excited for them, and they even won in the hours just before the event!

Check out their music video for the hit song “Hotel Key” below and let us know what y’all think!