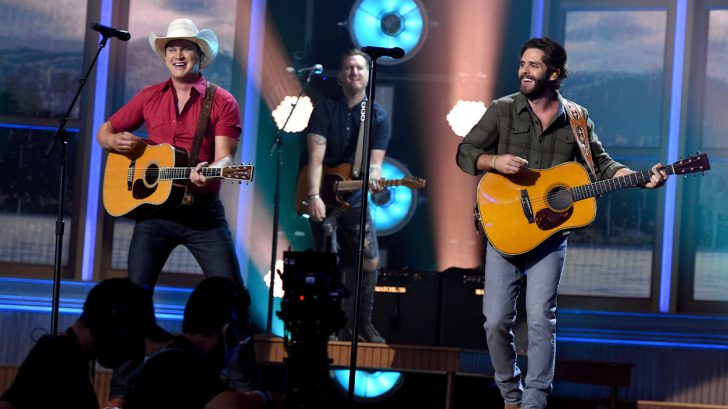 For the very first time in its existence, the ACM Awards is being held in Nashville, Tennessee. The show has been held in Las Vegas since 2003, with the exception of the 2015 show, which took place at AT&T Stadium in Arlington, Texas. Prior to 2003, the show was consistently held in Los Angeles.

The ACM Awards was supposed to take place in April 2020 in Las Vegas, but due to the coronavirus pandemic was rescheduled to Wednesday, September 16 and were held at the Grand Ole Opry House, the Ryman Auditorium, and the Bluebird Cafe.

One of the performances at The Ryman was from Thomas Rhett, who was partnered up with Jon Pardi to perform “Beer Can’t Fix.”

The backdrop to their performance featured images of a scenic lake broadcasted on the makeshift stained glass windows behind them. The duo delivered a fun, socially-distanced performance.

“Beer Can’t Fix” was released in January 2020 as the third single off Rhett’s album Center Point Road. The song reached the top of the Billboard Country Airplay chart in May 2020, making for Rhett’s ninth consecutive No. 1 single and 15th overall, while it became Pardi’s fourth hit song.

Listen to it below.