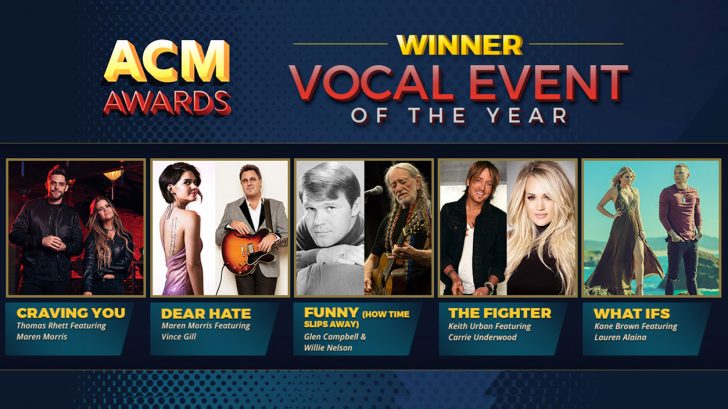 Keith Urban and Carrie Underwood walked away with Academy Country Music Awards‘  top honors for 2018 Vocal Event Of The Year.

Urban and Underwood…best known individually for their own iconic hit country songs struck gold by beating out some notable talent in the category.

The five nominees competing for top honors for the ACM Vocal Event Of The Year were Thomas Rhett and Maren Morris performing “Craving You,” Morris and Vince Gill entertained with “Dear Hate,” country legends Glen Campbell and Willie Nelson’s crooned “Funny (How Time Slips Away),” “The Fighter” featuring Keith Urban and Carrie Underwood, and newcomer artist Kane Brown teaming up with Lauren Alaina on his first number one single “What Ifs.”

Maren Morris was the only performer to double her chances to take home the coveted prize by bringing in two nominations…but she didn’t take home this award, unfortunately.

Keith and Carrie follow in the footsteps of 2017 award winner “May We All” by Florida Georgia Line featuring Tim McGraw.

The Vocal Event of the Year trophy goes to the Artist(s)/Producer(s)/Record Company based primarily on record sales, success with radio play, in digital media, video exposure and finally, the artistic merit of the single. Just as in the past, this year’s nominees were determined by nomination ballot and must be approved by the ACM Board.

Wondering if there’s another way to get in? If the performers’ single achieved a Top 50 on Billboard’s Hot Country Songs or Country Aircheck country charts during a specified period of time. Finally, if you’re ever wondering why there are always at least two or more artists listed as each contender, it’s because that’s the rule, folks.

To be eligible, the vocal event has to be a collaboration between two or more artists who don’t usually perform together. If you hear a song and recognize the individual voices, but pause to recall if you’ve ever heard them perform together, you just might be listening to a contender for Vocal Event of the year or even the winner! Additionally, they must both/all be credited on the album track listing.

Take a listen to the 2018 Vocal Event of the Year winner, Keith Urban featuring Carrie Underwood.

Do you agree with the choice of this year’s winner? Share your thoughts with us in comments.