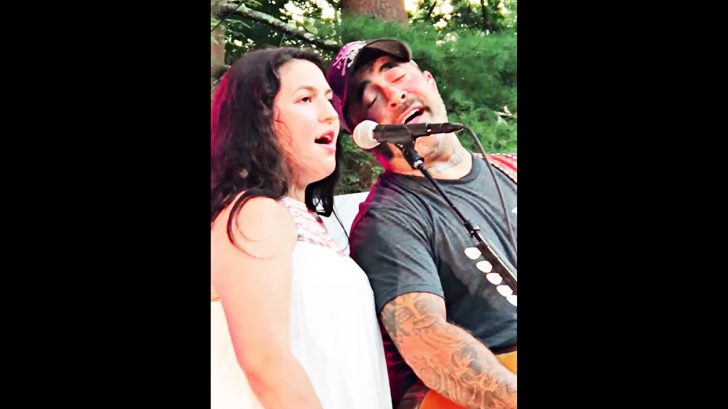 The harmonies in this unforgettable version of a country favorite are something you will remember forever – and it’s made even more special by the fact Aaron Lewis is singing alongside his baby girl!

Lewis, who first made his foray onto the country charts with 2011’s “Country Boy,” followed it up with a full sophomore album that featured some heavy-hitting tracks like “Travelin’ Soldier.”

Fun facts about Aaron Lewis: He likes to hunt, fish, golf, & ride his motorcycle for fun. He was the lead vocalist, guitarist and founding member of the alternative metal band Staind. He has 3 daughters. Want to know more? See him perform live on the Ford Theater stage April 18! pic.twitter.com/YnXmeUMPwC

On the album, Sinner, Lewis rounds out the 11 tracks with a studio version of this duet with his wildly talented daughter – but it’s their live performance that will truly leave you breathless!

The song was made famous by The Chicks in 2002 with their chart-topping single and has since become a staple in many country music collections while also being a favorite for country singers to cover in live shows and for various projects.

Lewis’ own rendition pairs the sweetness of his daughter, Zoe’s, voice with his own gravelly and raspy sound. The end result is a profound duet that’s rich with talent and overwhelmingly beautiful to hear.

Watch this live performance of their duet below!