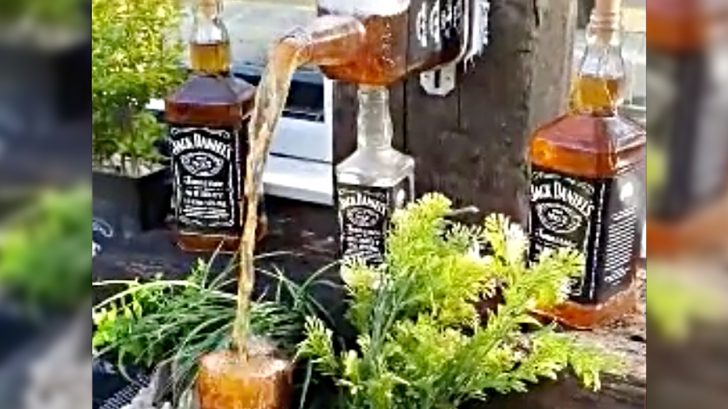 A couple from the United Kingdom has created an ingenious way to use empty Jack Daniels bottles!

Dave and Lisa originally had been saving their empty bottles to create candle holders. However, Lisa came up with the unique idea to create a garden water feature with them instead. While enjoying some adult beverages with Dave, they started to put the plan into action.

Lisa created the design, while Dave found items around the garden that he could use to piece together the fountain.

Dave admitted in an interview with Lad Bible, “It was a nice day and I was pretty drunk and just knocked it all together.”

To construct the incredible water fountain, Dave ended up using a pump from an old water feature that he adapted with LED lights and a smoke machine he had bought years prior.

Lisa suggested they use coffee grounds in the water to create the realistic look of Jack Daniels being poured from the bottles into the glass.

At night the fountain lights up and illuminates the Jack Daniels bottles on both sides and the glass that the water is being poured into.

Check out the water feature during the day and lit up at night in the videos below.