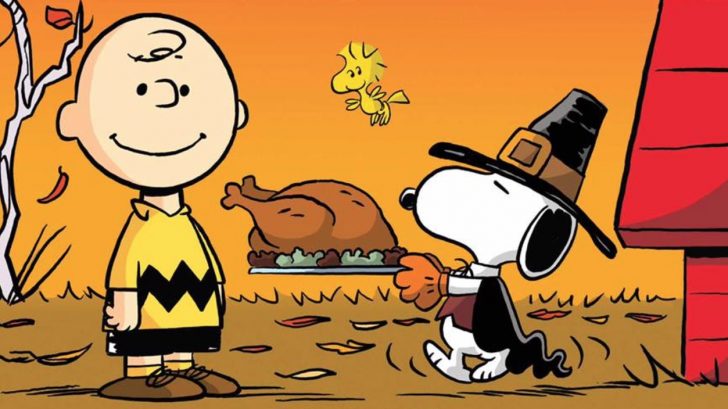 Get ready to celebrate Thanksgiving with your family and friends by watching the all-time classic special A Charlie Brown Thanksgiving that’ll be airing on ABC November 27th.

It airs just a day before Thanksgiving and right on time to get you and your loved ones into the holiday spirit. The show starts at 7:00pm (CST) Wednesday night and right after that ABC will be airing This Is America, Charlie Brown: The Mayflower Voyagers starting at 7:30pm (CST).

The short animated film was first aired on television November 20th in 1973 and won an Emmy Award the next year. Ever since then it has been replayed on multiple media outlets before or on the day of Thanksgiving. That’s 45 years in a row now it’s been played.

The Plot Of “A Charlie Brown Thanksgiving”

The story is about Peppermint Patty calling Charlie Brown to organize a Thanksgiving dinner that she invites herself and her friends to. Charlie doesn’t get a chance to say much before she hangs up the phone and finds himself trying to figure out what to cook because he only knows how to make “cold cereal and maybe toast.”

Charlie’s friend Linus shows up to the rescue and recruits Snoopy and Woodstock to help create the holiday feast. They get to work on making the meal and later all the guests arrive to the dinner table where Linus begins the celebration with a prayer.

After that Snoopy serves everyone jelly beans, pretzel sticks, an ice cream sundae, popcorn, and buttered toast. Patty becomes outraged at the untraditional meal and angrily goes off on Charlie Brown which makes him leave the table upset.

Feeling bad about her actions she asks Charlie Brown’s sister Marcie to go apologie to him for her in which she agrees to but then follows her and ends up apologizing to Charlie herself.

He accepts her apology and shortly after that Charlie realizes that he’s late to his grandma’s other Thanksgiving dinner. When he calls her to tell her he’s going to be late she finds out his friends haven’t eaten yet and invites them all over.

Everyone happily goes to his grandma’s dinner except Snoopy and Woodstock who go back to Snoopy’s dog house and proceed to make their own traditional Thanksgiving dinner with turkey and pumpkin pie.

This is America, Charlie Brown – The Mayflower VoyagersAnother one of my absolute favorites! Watch it every year, along with A Charlie Brown Thanksgiving

The Plot Of “This Is America, Charlie Brown: The Mayflower Voyagers”

This Is America, Charlie Brown: The Mayflower Voyagers is about Charlie Brown and his friends going back in time to 1620 and living with the Pilgrims who arrived on the Mayflower.

They learn about what it was like to build the first colony, the diseases the early settlers faced and the food the Native Americans helped them grow. They end up participating in the first Thanksgiving dinner celebrating it with both the Pilgrims and Native Americans.

If you’re working during the time or just unavailable to watch the two TV shows you can rent A Charlie Brown Thanksgiving on Amazon anytime you like and for free you can watch This Is America, Charlie Brown: The Mayflower Voyagers with an Amazon Prime Membership.

Enjoy A Short Clip From The Movie Below