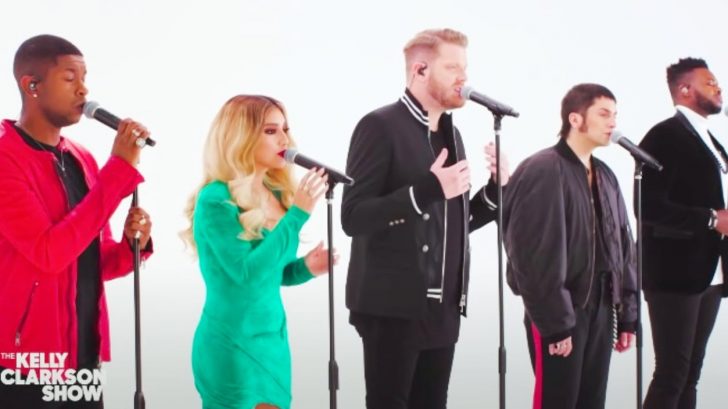 The a cappella group Pentatonix has become known for their Christmas covers. The most-viewed video on their YouTube channel is their rendition of Leonard Cohen‘s “Hallelujah,” which appeared on their 2016 album A Pentatonix Christmas.

Out of the ten most-viewed videos on Pentatonix’s Youtube channel, many are related to Christmas. They are famous for covering other classics such as “The Little Drummer Boy” and “Carol of the Bells.”

In 2020, Pentatonix released a new Christmas record titled We Need a Little Christmas. Before the album dropped, the group shared its lead single, which is their rendition of the hymn “Amazing Grace.”

They also created a music video for the song.

The music video for Pentatonix’s rendition of “Amazing Grace” quickly generated a bunch of views.. It goes to show just how much listeners love their rendition of the hymn.

So when the group made a virtual appearance on Kelly Clarkson‘s talk show The Kelly Clarkson Show, it only made sense for them to share a performance of “Amazing Grace.” Especially since we were fast-approaching Christmas Day at the time.

Keep in mind that since Pentatonix is an a cappella group, they perform without the use of instruments. Every sound you hear as they sing “Amazing Grace” is created by their voices.

Below you’ll find the video of Pentatonix singing “Amazing Grace” during their appearance on The Kelly Clarkson Show. It’s such an extraordinary performance…so don’t be surprised if you find yourself covered in goosebumps by the end.