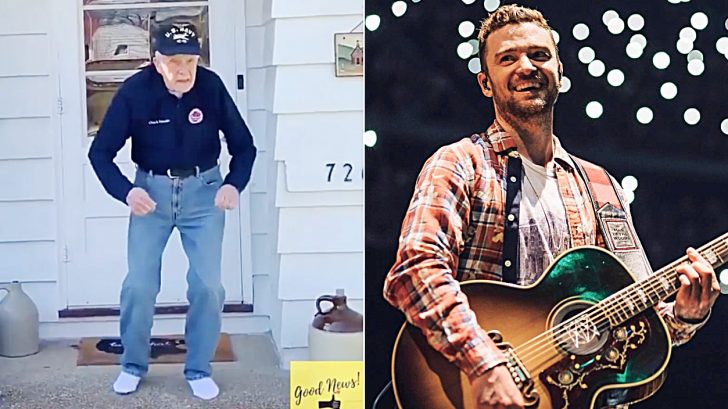 With the coronavirus pandemic still in full effect, many folks are stuck in their homes. Some are bored, some are scared to death of catching COVID-19, and some are saddened by the economy crashing. However, there’s a few out there taking this time to focus on having fun and enjoying themselves.

An Instagram account called Good News Movement posted an uplifting video of a 97-year-old WWII Wisconsin Navy pilot veteran named Chuck Franzkand and called him “Dancing Chuck.” The reason for the nickname is because he was filmed dancing in high spirits as the Justin Timberlake song “Can’t Stop The Feeling” was playing in the background.

The video showed the veteran opening his front door with his WWII hat on and putting his hand to his ear to hear the music. He started to sway back and forth to the beat and then stepped onto the porch before he began shuffling his feet, moving his arms and dancing around with joy.

Good News Movement found the video so motivating that they labeled it as “MOTIVATION: Even under quarantine, 97-year-old Wisconsin WWII Navy pilot Chuck ‘Dancing Chuck’ Franzk ‘can’t stop the feeling.'”

The media outlet then went on to ask their followers to tag Justin Timberlake’s account in the video in hopes he would see it, and guess what? He did. Justin responded to the video by commenting on the post “This just made my day” and then shared the video with his 53.4 million followers on his Instagram story.

Watch The WWII Veteran’s Dance In The Video Below