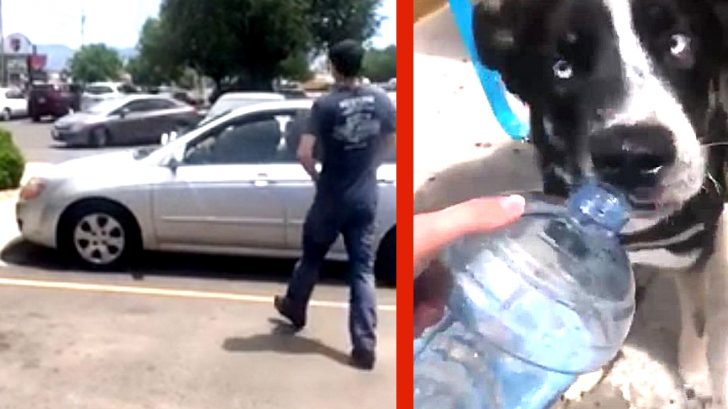 Remarkable cell phone video shows a man rescuing a helpless dog before he is killed by the immense heat of being trapped inside a car.

According to WLBT NBC 3, a young man named Gerasimos Klonis was outside of a local restaurant in Albuquerque, New Mexico when he spotted a medium-sized black and white dog trapped inside a car parked nearby.

“It was pawing at the window. It was trying to dig its way out of the car,” Klonis said.

According to another witness, the dog had already been inside the car for at least half an hour and it was 90-degrees outside. Quick-thinking Klonis called up 911 to report the issue and hopefully get some help for this poor dog.

“We didn’t feel comfortable waiting too long because every minute counts and that dog was not happy,” he continued.

But, after calling 911 and waiting another 10 minutes or so for authorities to arrive, Klonis admitted that he couldn’t wait any longer and decided to take action into his own hands.

At this point, the dog had been inside this car under the stifling heat for more than 40 minutes. “And that’s when I decided I can’t wait anymore. The animal was suffering too much.”

This gripping cell phone footage captures the exact moment when Klonis took a crowbar and smashed this person’s window open in order to free the dog.

Shortly after this, the owner came outside and Klonis confronted him. Animal welfare workers also showed up and issued the dog’s owner a citation for animal cruelty which carries a $500 fine and up to 90 days in jail.

Local police told WLBT that it is a citizen’s legal right to break a car window if a baby or dog is in distress.

Watch this harrowing footage below – and please remember to never leave your animals in the car while you are away. Temperatures can quickly reach 130 degrees (on a 90-degree day) in a matter of just ten minutes.

Man smashes window to save dog inside hot car in Albuquerque

A man rescued a dog from a hot car that was left parked outside a restaurant in Albuquerque, New Mexico, on August 4.