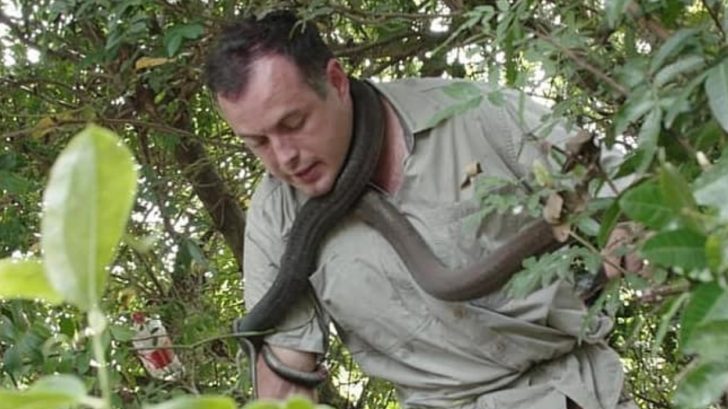 Nick Evans who is a professional snake catcher working in the province of KwaZulu-Natal in South Africa has an awesome story to tell. In January 2021, he was with a cameraman from Snake Season preparing to film a vine snake video when he got a call saying that a large black mamba had climbed up a tree in a small community.

“I was told there was a huge, black snake in a tree, and it needed to be taken away immediately,” Nick explained on Facebook.

Nick and the cameraman drove down to the site where the community led him to a big tree that was widely spread out over a creek that he says was filthy and littered with trash. He said the community didn’t have large dump trucks coming so everyone used the river to dump their trash. It was disgusting and sad but he was there to do his job.

A local pointed out the snake in the tree to him but he didn’t see it and decided he was just going to climb the tree and find it along the way. As he started climbing the tree, the climb was more of a sideways climb a vertical climb. He was moving across the branches when he looked down and to his surprise, the massive black mamba was right beside his foot.

He quickly grabbed the snake with his tongs and then by the back of the head with his hand once it was safe to do so. The mamba wrapped its “stank” body around Nick’s face and began to tighten up around his neck. He said that musty snake smelled horrible and it was tightening up almost as if it was a python.

Nick struggled to climb down while it choked him, but he eventually made it to the ground where he was met by 60-70 people cheering. Nick smiled and then quickly transported the 8.4ft snake to a nature reserve where he says it can live out the rest of its days in peace, without having to worry about humans.

Take A Look At The Snake Pictures Below