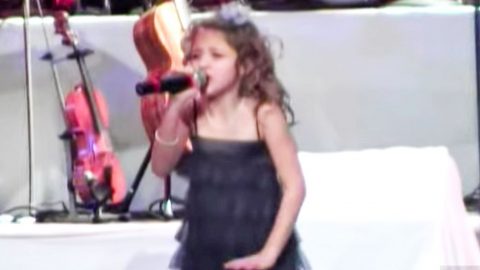 At only 13 years old, Brenda Lee stepped into the studio and recorded what is now the 4th most digitally downloaded Christmas song of all time. While Lee’s recording is now beloved by millions, it wasn’t a smash success immediately following its release.

Lee recorded “Rockin’ Around the Christmas Tree” on October 19, 1958 and released it in December of that year. But it was far from a hit, so Lee tried the song again the following year. Although it did better than before, it still wasn’t good enough.

Finally, Lee tried the song for a third time in 1960, after she had obtained a greater level of fame. It was then that “Rockin’ Around the Christmas Tree” soared up the charts and therefore earned its spot in Christmas music history.

Due to the popularity of Lee’s song, it’s been covered by more singers than we can count. But one little Christmas cutie sang the most adorable version of the song we’ve ever heard, and we knew we had to share it with you.

In 2010, one sweet little girl named Avery took to the stage at the Cactus Family Christmas Celebration to sing Lee’s classic Christmas jingle. At age eight, Avery was only five years younger than Lee was when she originally recorded the tune.

Dressed in a cute fringe dress, little Avery danced around the stage as she sang in her sugary-sweet voice. She looked like she was having the time of her life, as she couldn’t seem to wipe her smile off of her face.

You also won’t be able to keep yourself from smiling when you watch Avery sing “Rockin’ Around the Christmas Tree” in the video below. So go ahead and enjoy!

Besides Lee’s famous tune, which Christmas song is your favorite?