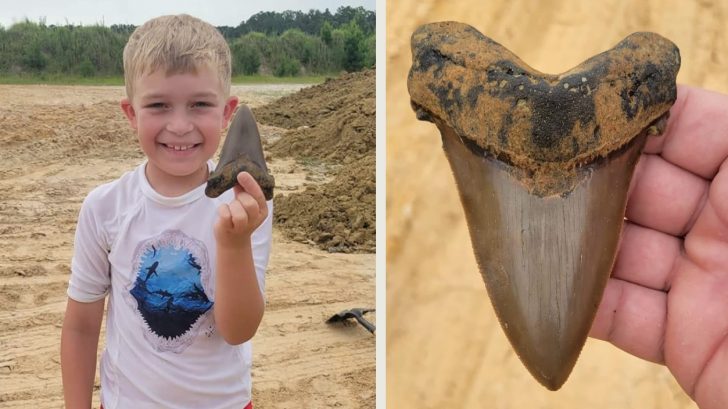 Riley Gracely of Lebanon, Pennsylvania traveled to Myrtle Beach, S.C. for vacation with his family when he found a fossilized tooth from a 30-foot shark.

The outdoorsy eight-year-old was with his father, Justin Gracely, his mother, Janelle Gracely, and his brother, Collin, when they decided to stop by Palmetto Fossil Excursions, an educational fossil-hunting expedition facility in Summerville, South Carolina.

There, Riley “was walking around the bases of these piles of gravel and dirt and noticed what he thought was the edge of a tooth,” Justin said in an email to Fox News. “When he pulled it out, he was so excited. We are so proud of Riley.”

The tooth was found in the facility’s ‘premium’ gravel layer and was 4.75 inches. It belongs to belong to an angustiden shark, which are believed to reach up to 30.5 feet. They lived about 22-33 million years ago during the Oligocene and Miocene epochs.

Palmetto Fossil Excursions says on their website, “We call it ‘premium’ due to the high quality of preservation in the hastalis, tigers, cows, great whites and bull shark teeth that are coming out of it. There are also a high number of megalodon teeth and large angustidens in the layer, along with whale, tapir, and other mammal teeth. Simply speaking, this is some of the richest fossil layer we have ever seen. The colors on the fossils are also amazing, which is caused by the sediment in which they fossilized.”

The proud father said staff at Palmetto Fossil Excursions informed him and the family of the significance of Riley’s find.

Justin said, “We probably found 7 or 8 species of teeth in all.”

Experts believe angustidens were closely relative to megalodons, which are said to be the largest sharks believed to ever live on the planet.

Megalodons measured up to 68.6 feet in length and lived approximately 23 million to 3.6 million years ago during the early Miocene and Pliocene epochs.