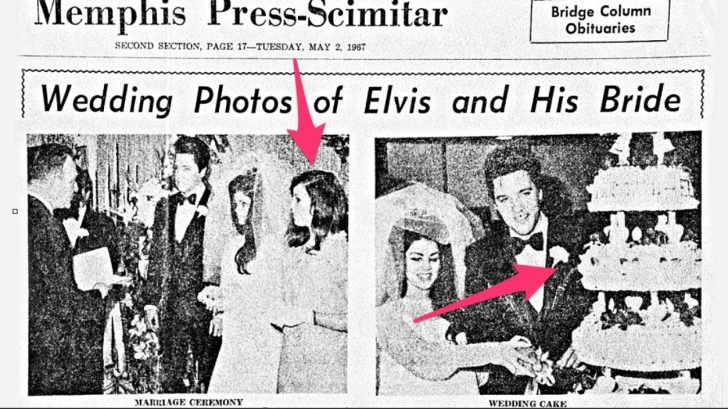 Already a music superstar and Army veteran, Elvis Presley had lived a lifetime of experiences by the time he married Priscilla at just 32 years old.

The mid-spring wedding at Las Vegas’ brand-new Aladdin Resort & Casino was something that not many people knew about beforehand – and something the media went bonkers for the days following.

Elvis, who at the time was one of the world’s biggest stars, had kept details of his wedding a secret from nearly everyone – only revealing them to people on a need-to-know basis. Because of this, many people today do not know the majority of the curious details surrounding his big day with Priscilla Presley Ann Beaulieu.

Priscilla (aged 21 at the time of the wedding) brought her younger sister along with her to the wedding and she served as the maid of honor during what would become – one of the most-talked-about weddings to ever occur.

Priscilla’s sister, Michelle – who was just 13 at the time – supported her big sister and stood at the altar while Priscilla and Elvis exchanged their vows – which were customized according to Elvis’ wishes.

When getting the vows set for the big day, there was something specific that Elvis wanted to be removed from the otherwise-traditional setup.

At The King’s request, the couple’s vows removed the word “obey” but left almost every other part the same as traditional vows. The ceremony, which lasted a total of eight minutes, also featured his entourage as the groomsmen.

The love story of Elvis and Priscilla Presley began when he was stationed in Germany with the Army and she was living there with her parents while her dad was an Air Force Captain.

Once he’d returned back home to the States and resettled back into his Graceland Estate, he and Priscilla kept in touch via phone until she turned 17 – at which point her parents allowed her to move to Memphis to be with him, but solely based on the condition that they would eventually marry.

This would come to be the source of a deeply emotional moment for The King – just minutes before his wedding was set to take place.

In the 1998 biography Down at the End of Lonely Street: The Life and Death of Elvis Presley, his cook revealed that she discovered him crying at one point about the wedding.

When she asked why it couldn’t be called off – she says he told her that he “didn’t have a choice.” And many people have speculated that Priscilla’s father had threatened to have Elvis arrested (because of her young age when they started dating.)

The couple’s big day would come to be one of the most expensive weddings – at the time. The cake alone cost more than $22,000 (adjusted for inflation) and was crafted from yellow sponge cake. The filling was made of apricot marmalade and a liqueur-flavored cream.

Although the cake carried a hefty price tag, it wasn’t the only super-expensive item on the list. The engagement ring Elvis proposed with had more than 20 diamonds circling a three-and-a-half carat diamond.

Even the breakfast buffet they treated their guests to cost a whopping $10,000 and served up lobster, oysters Rockefeller, roasted pig, and Southern fried chicken – plus all the champagne they could muster!

Between the eight-minute ceremony and the reception, Presley’s manager, Colonel Parker thought the event would be a great time for a press conference to bolster Presley’s public image – so the newlyweds sat down with media folks for a brief time before they headed to greet their friends and family.

Immediately following their reception, The King and his new queen took off from McCarran Airport in Frank Sinatra’s jet and zipped straight over to their honeymoon home in Palm Springs.

The house there that they spent the first month of their marriage in has now been turned into a museum and just recently was on the market!

Their honeymoon was clearly a time of great love for the couple as Elvis’ only child, Lisa Marie Presley, was born exactly nine months to the day after their wedding – on February 1st, 1968.

After their initial reception and the honeymoon, they held a secondary reception for the friends, family, and loved ones who couldn’t make it to the first one.

They also renewed their vows several years later in Hawaii, but neither celebration was as historic as their original wedding.