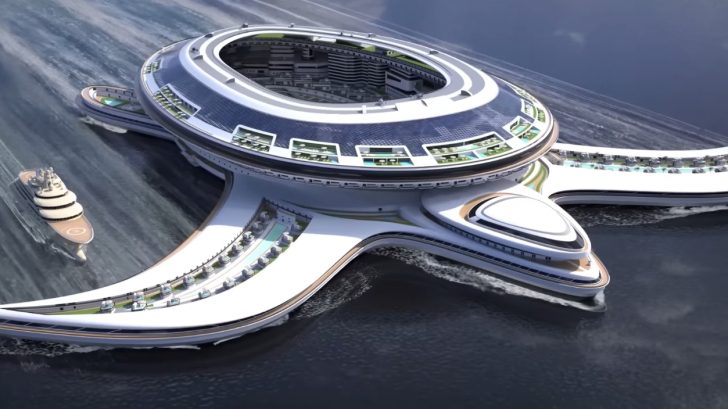 A massive $8 billion terayacht that looks like a sea turtle is being discussed by its designer, Lazzarini Designer, to start construction as early as 2033. When constructed, it will be the largest floating structure in history that’s ever been built.

Bigger than a superyacht, megayacht, and gigayacht, this terayacht known as Pangeos, which is named after Pangea, a supercontinent that existed from 200 million to 335 million years ago, will be 1,800 feet long and 2,000 feet wide.

The luxury boat will be a floating city that will have hotels, shopping malls, gardens, and even ports for smaller ships and aircraft to get guests onto the tera-turtle in style.

To construct it, a special place will have to be built that doesn’t exist yet but the designers have hinted that it will most likely be built on the shoreline of Saudi Arabia at King Abdullah Port, which is 81 miles north of Jeddah.

A circular dam will be built on the shoreline of the Red Sea that will cut out one square kilometer of water and then the water will be dredged out to start construction.

It will take a total of 8 years to build Pangeos from start to finish but once completed, the dam wall will be removed and the sea will naturally flow under it and begin to hold it up so that it can then start its journey.

Equipped with nine HTS (high-temperature superconducting) engines which will be fully electric motors, the terayacht will be capable of 16,800 hp and able to cruise at a speed of 5 knots.

The boat’s large wings will gain energy from the waves breaking, allowing Pangeos to cruise perpetually around the planet without releasing any emissions.

The rooftop will also be equipped with solar panels which will provide the vessel with the necessary clean energy to power the terayacht.

Although the luxury boat is just an idea not physically created yet, there is a crowdfunding initiative at Pangeos Yacht that allows you to buy anything from a virtual entrance ticket ($16) to a VIP apartment ($169) via NFT so you can see it as if you were really there.

And if you want to put a monetary deposit towards building the real thing, that is also available on the website. However, if you’d like just to take a look at the design for free, you can view the YouTube video below by Lazzarini Design showing how magnificent it is.

Video Of The Largest Floating Structure Below