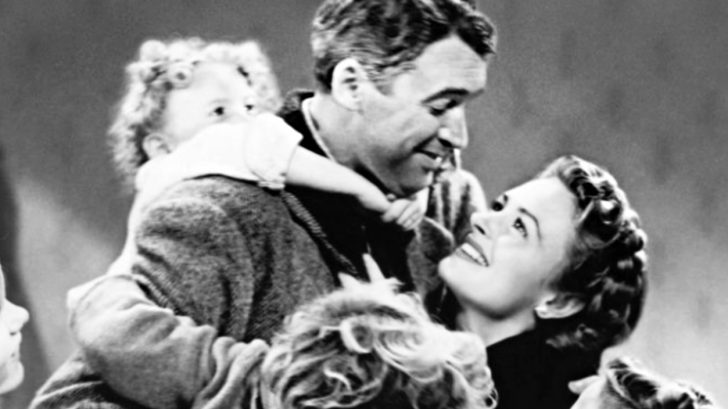 It’s a Wonderful Life is one of the most popular Christmas classics of all time, but the movie’s rise to popularity was not an easy one.

Here are eight behind the scenes facts about the film that might surprise you!

It Began With A Creative Christmas Card

Philip Van Doren Stern tried unsuccessfully for years to pitch his short story, The Greatest Gift, to publishers. Eventually, the author decided to print 200 copies of his work as a 21-page Christmas card for friends. RKO Pictures producer David Hempstead intercepted one of the manuscripts and purchased the movie rights for the short story for $10,000.

Cary Grant Was Originally Supposed To Play The Lead

When RKO purchased the rights, they planned for Cary Grant to play George Bailey, but the company sold the rights to Frank Capra in 1945. Capra quickly recruited Jimmy Stewart for the lead instead.

The Movie Tanked At The Box Office

Now considered a classic, the movie was not an immediate hit. The film set Capra back over half a million dollars, and the producer struggled to finance his next picture, State of the Union.

When the movie was filmed, fake snow was created by using painted cornflakes, but Capra could not stand the crunching sound. He and the special effects supervisor created a type of artificial snow made of fire extinguisher foam, soap, water, and sugar.

ZuZu Did Not Watch The Movie For 40 Years

Actress Karolyn Grimes, who played the Bailey family’s youngest daughter, ZuZu, is most famous for her line “every time a bell rings, an angel gets his wings.” Grimes admitted in an interview with Vanity Fair that she did not sit down and watch the movie until 1980; however, the actress has now seen the film over 500 times.

There Was A Heat Wave During Shooting

Despite the mounds of fake snow, the Christmas movie was shot in the middle of a summer heatwave. Capra even had to shut down a day of filming because of the harsh temperatures. Of course, the extreme heat does explain why Stewart was sweating throughout the film.

Bedford Falls was one of the most elaborate movie sets of its time. The construction included 75 buildings, domestic living areas, factories, and a 300-yard Main Street. All of which was built on a budget of 3.7 million dollars.

There Was Supposed To Be A 2015 Sequel

It’s A Wonderful Life: The Rest of the Story was supposed to star Karolyn Grimes and showcase what happened to the Bailey family after the first movie came to a close. The premiere was set for Christmas 2015, but the film was never released due to a missed deadline.

Watch Karolyn Grimes talk about the first time she watched the film in the video below.