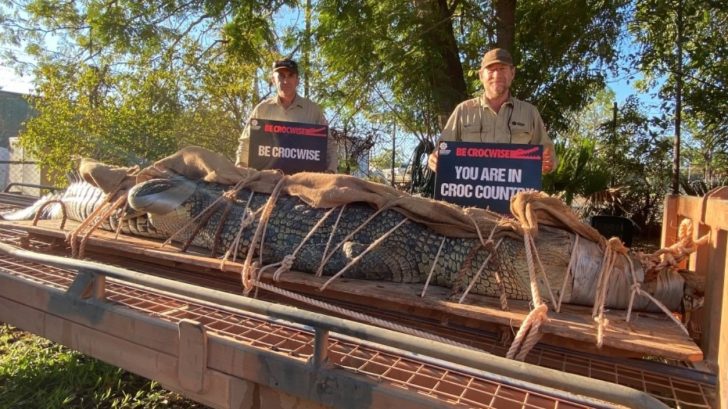 A giant male crocodile was captured by wildlife rangers in Australia’s northern territory. It happened in an area about 75 miles southwest of Katherine, where tourists are used to visiting.

Katherine senior wildlife ranger, John Burke, told ABC News that it is the biggest crocodile they have caught from the area in half a decade.

Posted by Northern Territory Parks and Wildlife on Tuesday, August 25, 2020

“I certainly wouldn’t want to run across him when I’m out fishing. With the weather warming up, the crocodiles are becoming active. They’re moving into breeding season as well, and the rivers are low and they’re out looking for mates, particularly the big males,” John said to Australia’s ABC News outlet.

Capturing a big crocodile isn’t uncommon in the Katherine River. The average length of crocodiles that rangers catch are about 11 feet long. The big ones can be up to 15.4 feet.

Katherine rangers trap biggest crocodile in years near NT tourist spot. Wildlife rangers in the Top End have caught a…

Katherine wildlife rangers captured more than 20 crocodiles from the River three years ago. However, due to the region suffering from low rainfall, crocodiles haven’t moved much and stayed mainly in the water holes. John told ABC News that the number of captured crocodiles decreased drastically recently.

Regarding the 770-pound male crocodile, he was moved to a farm for breeding stock.

“Hopefully, it will be a little croc resort there and he’ll have a new girlfriend,” John told ABC News.

Wildlife rangers have trapped a 4.4-metre saltwater crocodile at a tourist destination in Australia's Northern Territory.The 350-kilogram male was caught in the Flora River, at a remote nature park 120 kilometres southwest of the Outback town of Katherine.A wildlife ranger said the crocodile is the biggest captured in the area in years. The animal has been taken to a crocodile farm to become part of a breeding programme.#GiantCrocodile #Crocodile #Australia