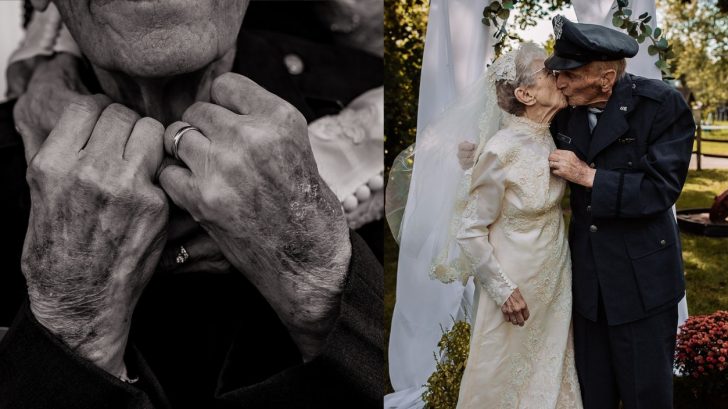 The two got married in 1944 in Oelwein, Iowa and at the time, everything around them was happening so fast that they didn’t have time to take any wedding photos. Within two days after getting married, Royce was shipped off to fight in World War 2.

When he finally retired from the Air Force, he founded the Oelwein Implement Company and worked in local schools for income. Frankie was a housewife, as well as took on jobs like being a florist and a dental assistant to help support the family.

The two currently live in their home in Oelwein and receive hospice care from St. Croix. The staff heard about the couple not having any wedding photos and put together an event in the couple’s backyard.

On September 16, their daughter, Sue Bilodeau, helped her mother get into a vintage wedding dress that was provided by St. Croix and Royce wore his Air Force uniform to the wedding.

“They escorted my dad outside, sat him down and we put a little handkerchief around his eyes,” Sue told the Des Moines Register’s Isabella Rosario. “We walked Mom down the back steps and across the yard, and then she stood in front of Dad, and then I was able to take off his handkerchief. I said, ‘Are you ready to see your bride?'”

Sue said when he laid eyes on his wife he had the biggest smile in the world on his face. They spoke about their love for one another, kissed, took photos, and even cut a cake shaped in the number 77.

The photographer Hilary Nichole said she had a hard time keeping it together behind the lens as she photographed the couple. See her full statement below.