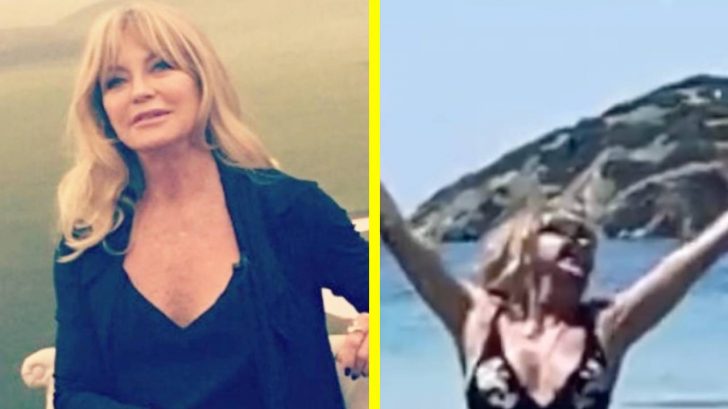 She may be in her mid-70s, but Goldie Hawn doesn’t let that stop her!

Hawn rose to fame in the late 60s in the sketch-comedy show Rowan & Martin’s Laugh-In before earning a Golden Globe and Academy Award for her starring role in the 1969 film Cactus Flower.

Over the next few decades, Hawn maintained her leading lady status in films such as Shampoo, The Sugarland Express, Overboard, First Wives Club, and Private Benjamin, which earned her another Academy Award nomination, just to name a few.

During her starring role in the 1984 movie Swing Shift, Hawn reconnected with an old co-star Kurt Russell. They began a romantic relationship and have been together ever since! Though never married, they have one child together, and several grandchildren. Hawn’s kids, Kate and Oliver Hudson, also consider him a father to them seeing as he raised them!

Since Hawn set up an Instagram account, people have been loving her posts, which include adorable photos of her grandkids, with Russell, and some hilarious videos of herself. She does have incredible comedic timing, after all!

One of the latest videos she shared was of her dancing on a beach during her Grecian vacation to the tune of ABBA’s song “Mamma Mia.”

Hawn rocked a black bathing suit and splashed around in the water while she danced. We loved her energy and zest for life, as did her followers!

While her longtime beau wasn’t in the video, we have a suspicion that he was behind the camera! Watch the video below.