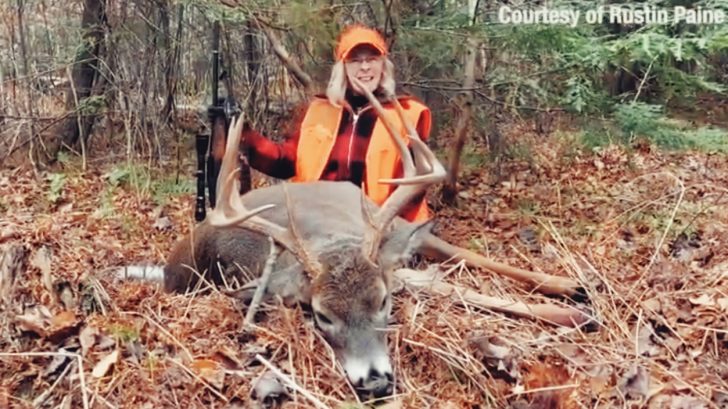 74-year-old Ruth Paine from Maine harvested a 10-point buck that she says was supposed to be her husband’s harvest.

“We had an agreement that if a really big one came by, he was going to shoot it,” Ruth told Bangor Daily News. “If a seven-pointer comes, a six-pointer, I could shoot it. Because he hasn’t shot a really big one for a while.”

Ruth and her husband Ron set off before sunrise and made their way to their blind to settle in before the hunt started. As they waited, they talked, snacked on donuts, and texted their family members.

“We get bored after a while and we start eating our donuts and whatnot. Sometimes we bring coffee. And thank goodness for texting, because if we get really bored, we text someone,” she said.

After a long wait, they heard a few gunshots about 400 yards away from them. Ron decided he was going to go check it out, see if the hunters had shot a deer, and maybe help them if needed. Ron went off and texted her a little while later saying that the hunter missed their shot and he was headed back to her.

As Ruth waited, she noticed the trees moving and a big buck stepped out into her view. Ron wasn’t there to take the shot that they agreed upon so she took it. By the time Ron made it back to the blind, she was already 90 yards away headed towards the buck.

They were both excited as they examined the 193.5-pounder. Ron started recording a video of Ruth telling her story of how it all went down from his phone. Check that video out below!