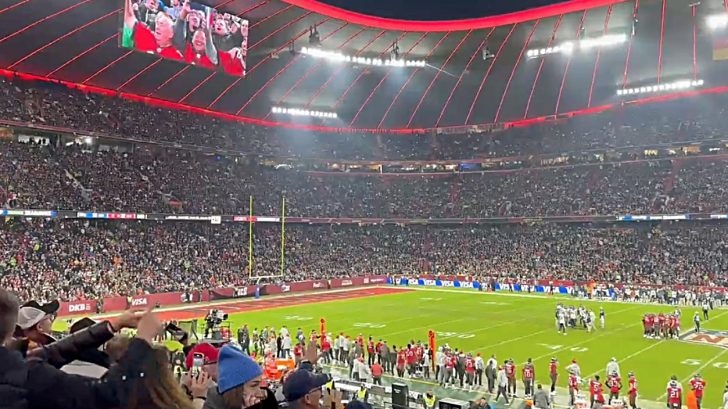 ESPN’s Jenna Laine was in the stands of nearly 70,000 at Allianz Arena in Munich, Germany when she filmed the entire stadium singing John Denver’s “Take Me Home, Country Roads.”

It was the very first-ever NFL game in Munich and it was in the final two minutes between the Buccaneers (5-5) and Seattle Seahawks (6-4) when the song came on and everyone started singing.

The Germans and international fans who flew out to watch the game were certainly a lively crowd and it surprised Jenna, along with other Americans to see that the song was just as popular in Germany, nearly 5000 miles away, as it is in the states.

Even when the song stopped playing on the speakers, it didn’t stop fans from singing “Take Me Home, Country Roads.” In fact, the crowd actually sang it louder when the music turned off, which was very impressive to people who were tuned into the game.

The Buccaneers ended up winning 21 – 16 against the Seattle Seahawks and Buccaneers quarterback Tom Brady set another record by becoming the first quarterback to start a game in four countries (U.S., Mexico, England, and Germany).

That night Brady also became 4-0 in his career for the international games he’s played. Against the Seahawks, Brady completed 22-of-29 passes for 258 yards with two touchdowns and one interception against Seattle.

Just watch the entire stadium at Allianz Arena singing to John Denver’s “Take Me Home, Country Roads” (very popular with the Oktoberfest crowd, I have learned) in the final two minutes pic.twitter.com/PwMUG2Z08n