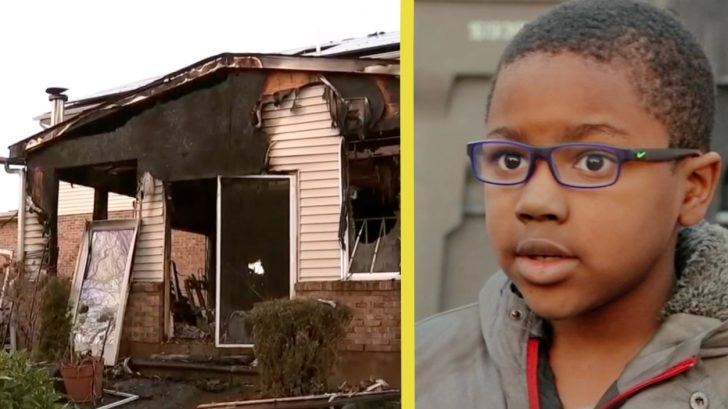 7-year-old Yanique Rainford Jr. from Bear, Delaware was with his 2-year-old cousin Liam Rainford at their 92-year-old great-grandmother Rosamond Rainford’s house when it went up in flames.

Yanique said he went downstairs to get a glass of water and noticed a blaze of fire was coming from the back porch. He immediately ran upstairs and grabbed his 2-year-old cousin and brought him out of the house before running back in for his great-grandmother.

“I told my grandma to come, but she was trying to put the fire out,” Yanique explained to CBS Philly. He then grabbed his phone and called the police.“I told them, ‘This is Yanique Rainford, 242 Rice Drive, can you please come?'”

Within minutes firefighters arrived on the scene and pulled his great-grandmother out of the house who had fallen down and was lying unconscious near the door. Firefighters quickly pulled her from the home and transported Mrs. Rainford to Jefferson University Hospital for medical treatment.

After authorities investigated the cause of the fire, they concluded it was started from a pellet stove on the back porch which had malfunctioned and accidentally set the blaze.

Overall, officials were amazed at the 7-year-old’s bravery and the fact that he had the know-how to call and give police a proper address to the fire. Yanique’s family was also very proud and thanked him for his heroic actions. He was interviewed by reporters and you can view that interview below.