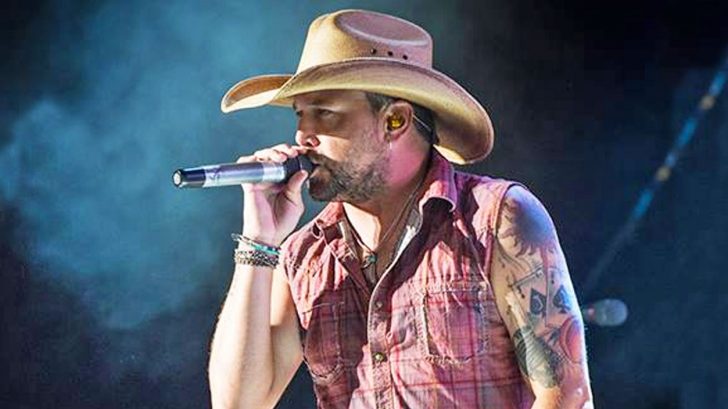 Jason Aldean is one of the biggest stars in modern country music. Since his debut in 2005, he’s released eight albums and 31 singles, 21 of which have reached the number one spot on either the Hot Country Songs or Country Airplay charts.

Thanks to social media, we have been able to get to know Aldean on a more personal level, as he often shares photos from his daily life with his daughters, Keeley and Kendyl, his wife, Brittany, their son Memphis, and daughter Navy.

1. Alabama Is His Favorite Band Of All Time

He may be a proud Georgia-native, but Aldean is a diehard Alabama fan – Alabama the band, that is! He’s always been a huge fan, so when he was asked to sing with them on their tribute album, Alabama and Friends, he must have freaked out!

Aldean recorded their 1980 hit “Tennessee River” and documented their time in the studio on Instagram.

“In the studio with my favorite band….Alabama!!!!!” he captioned the selfie of him and Alabama’s lead singer, Randy Owen.

2. He Started Playing In Bars Before He Could Get In

Thanks to my boy @jimmy_w_cannon for this throwback Thursday pic. Who knew what was to come way back then. #blessed

You gotta start somewhere! It’s not uncommon for country singers to start their career in the bar scene, but it sure is when they’re this young!

Aldean started playing at bars when he was just 15, six years before he could legally enter a bar! His mom would wait for him until his set was over, and then she’d drive him home to do his homework.

In 2014, Jason told Us Weekly several different things we may not have known about him. One of the more surprising facts was when he said he didn’t think he’d make it in country music until he released his 2008 single “She’s Country.”

At this point in his career, he had already released two albums, and had a number one single, five consecutive top ten hits, and an ACM Award for Top New Male Vocalist, but his career skyrocketed with “She’s Country.”

It was his first Top 40 number one, his second country number one and set the tone for many of his hits to come.

4. His No. 1 Hit “Big Green Tractor” Was Offered To Someone Else

It’s hard to imagine anyone else singing “Big Green Tractor” besides Jason Aldean. It was the second single off his third album, Wide Open, and became his third number one on the country charts.

But did you know Jake Owen was first offered the song and turned it down? It’s true!

According to Taste of Country, Owen turned it down because he did not relate to the lyrics. See, he hails from Winter Haven, Florida and the song’s lyrics are about growing up in rural America. He felt it would be disingenuous for him to record it, so he passed.

In a 2014 interview with Us Weekly, Aldean said that the “best parties always include karaoke and tequila.”

After some digging, we actually found out this statement was completely serious! Aldean sat down with Entertainment Weekly in 2009 and he once again spoke about his love for singing karaoke in a bar.

“I think that is the funnest thing ever to get really drunk and go to a karaoke bar and get up there act stupid,” he said. “Now one thing I think is really lame, is if you’re an artist and you go to a karaoke bar and sing your own song. I like to get up there and sing stuff that I would never sing on stage anywhere else. Like [Neil Diamond’s] ‘Sweet Caroline,’ that’s one of my standards.”

He pointed out to Us Weekly that his go-to karaoke song is actually “Drift Away” by Dobie Gray. He also said that when he’s in Georgia with certain friends they do “Seven Bridges Road” and “Superstition.”

Imagine walking into a karaoke bar and seeing Jason Aldean singing Stevie Wonder! We know the video above isn’t him singing karaoke, but it is him singing an Eagles cover – and with Keith Urban – which is the next best thing!

6. He Used To Rock A Mullet

Jason Aldean knows he always wears hats, whether it be a baseball hat or a cowboy hat. He even felt the need to assure everyone that he does indeed have hair under those hats!

While there’s not much photographic evidence of his mullet-wearing days, we do have this photo of an album he self-released back in the day when he did rock the “business in the front, party in the back” look.

7. He Turned Down A College Baseball Scholarship To Pursue Music

Aldean was offered a baseball scholarship for college, but the then-high schooler turned it down.

“I just couldn’t see going to school for four more years,” he said, according to Taste of Country. “It was hard enough to get out of high school. I went to school basically because I had to and because I wanted to play baseball. That was about it.”

He is still a huge baseball fan (his team is the Atlanta Braves), and has even participated in some sort of activity with the Braves during Spring Training several years ago.

Which fact surprised you the most about Jason? Let us know in the comments!