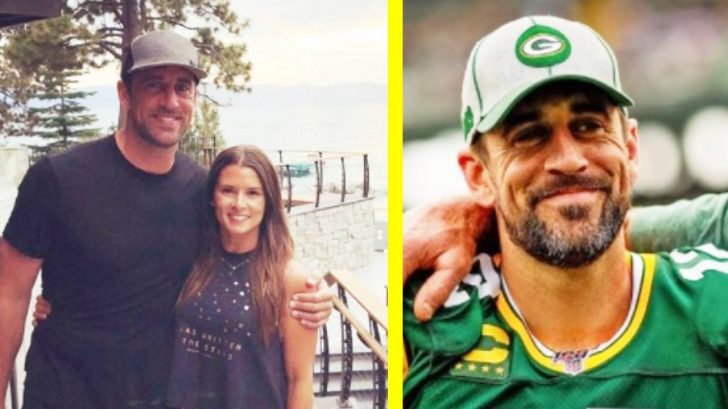 After they announced they were a couple in January 2018, it seemed NASCAR driver Danica Patrick and quarterback Aaron Rodgers were in it for the long haul. They even bought a house together in Malibu. But, on July 16, 2020, the pair announced they called it quits after over two years together.

Aaron Rodgers & Danica Patrick have officially split after over 2 years together. ? https://t.co/CrqmlrXxUa pic.twitter.com/UngrgxJjhH

Since the break-up, Patrick went on a talk show and said her next boyfriend has his “work cut out for him,” while Rodgers dove head first into his 13th season as the starting quarterback for the Green Bay Packers. He led the team to the playoffs and eventually won the third MVP honor in his career.

Because the NFL Honors was held virtually, he accepted his MVP award and announced that he had gotten engaged.

“It’s an honor to win this award for the third time. 2020 was definitely a crazy year, filled with lots of change, growth, some amazing memorable moments. 180 straight days of having my nose hairs scraped. Playing for very little fans or no stands the entire season, I got engaged, and I played some of the best football of my career,” he said.

He also thanked his “fiancee” among the long list of people he credited for helping him get the MVP award again. The engagement news comes just a few days after E! News confirmed he was dating actress Shailene Woodley.

While Rodgers never named Woodley as his new fiancee, we can only assume she is the future Mrs. Rodgers!

In fact, neither has ever spoken about each other by name, but in September, the quarterback went on the Pat McAfee Show and spoke about his “new and increased love of life.”

He said, “I’ve made decisions and changes and habits that put me in a lot better headspace and there’s just a lot of things that have come together in my life over the last few months that have really been enjoyable. That’s why I’m having so much fun and it starts with love. And then surrounding yourself with people that you really enjoy.”

Why is @AaronRodgers12 having so much fun?

Congratulations to Rodgers and Woodley!

Watch Rodgers’ acceptance speech where he confirms his engagement below.