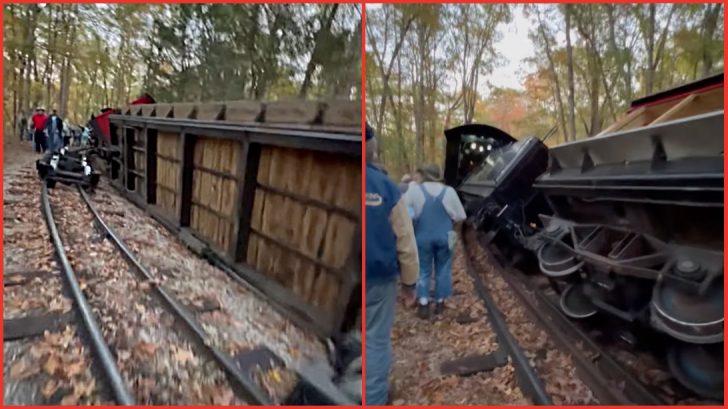 Six visitors and one employee were taken to a local hospital after the train they were riding on at Silver Dollar City amusement park derails and flipped.

According to a press release from the park, the incident happened just after 6 p.m. when three of the four cars on the Frisco Silver Dollar Line Steam Train derailed. There were 160 passenger aboard at the time.

A video captured and shared by passenger Gary Eldridge shows three of the train cars laying on their side. Eldridge captioned the video saying that he was on the only train car that didn’t flip over, and that there were “a bunch of bumps cuts and bruises.”

Another passenger, Adam Swenka, captured the aftermath and shared the video along with his account of what happened on Facebook.

“Our family took the train to have a relaxing ride around SDC and about 25% into the ride (literally right after the conductor made a “bad brakes” joke) the train came off the tracks,” Swenka wrote. “Not just off the tracks but two train cars actually slammed on their side and the passengers couldn’t get out unless they scaled around 10 feet to the top of the car. One of the cars had some injured so they had to bust out the glass to get them out.”

Swenka shared that he was surprised there weren’t worse injuries considering “the way the train car infront [sic] of us whipped into the ground.”

According to Silver Dollar City’s website, the Frisco Silver Dollar Line Steam Train is a 20-minute ride “through the beautiful Ozark countryside” surrounding the theme park.

The highlight of the ride is a comedic train robbery re-enactment that takes place about halfway through the ride. Videos shared by previous guests show the train winding slowly through the park, crossing bridges and trestles along its way.

Silver Dollar City, located in Branson, Missouri, that is known for its family-friendly atmosphere combined with crafts, food and more that are dedicated to the preservation of 1880s Ozark Mountain culture. Over 100 craftsmen and women work on site demonstrating the art of glass blowing, blacksmithing, pottery, candy making, candle making, and more.

More than 40 rides and 60 shops and restaurants can be found throughout the park. Silver Dollar City also hosts 10 major festivals during the year, including a Bluegrass & BBQ Festival, Country Music Days and Southern Gospel Picnic.

Silver Dollar City is owned and operated by Herschend Family Entertainment, the same company behind Dollywood Theme Park and Resorts.