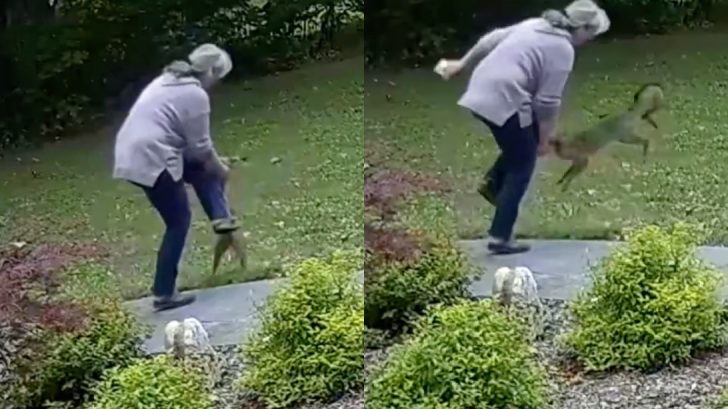 A New York woman was repeatedly attacked by a rabid fox and the encounter was caught on a nearby security camera.

Sherri Russo, a retired nurse, was talking on the phone in her front yard when the fox snuck up behind her and nipped at her leg. Russo first thought that the fox was the neighbor’s dog and turned around to shoo it away. But, to her surprise it was a gray fox.

“When I got the first nip on the outside of my leg, I actually thought it was our neighbor’s dog,” Russo said. “I lifted my leg and was getting ready to say ‘hey, what are you doing?’ and shoo him away, but I looked down, and I saw this grey fox.”

The persistent fox wouldn’t leave Russo alone and kept coming back after being thrown to the ground over and over again. She told Fox News that despite him being a “little guy” she wasn’t confident in her ability to run him off due to his “relentlessness.”

“When I reached down to grab him off my leg and yank him away, that’s when he took a hold of between my thumb and my forefinger, and he just chomped down on me,” she said.

The 61-year-old’s neighbor heard the commotion and came to her rescue, using a stick to chase the fox away.

“I will be grateful to him for the rest of my life,” Russo told Inside Edition. “I just thank God that he heard me.”

Sherri suffered 16 puncture wounds from the incident and was treated with the rabies vaccine and antibiotics. The fox was later captured and tested positive for rabies.

See the frightening incident in the full surveillance video below.